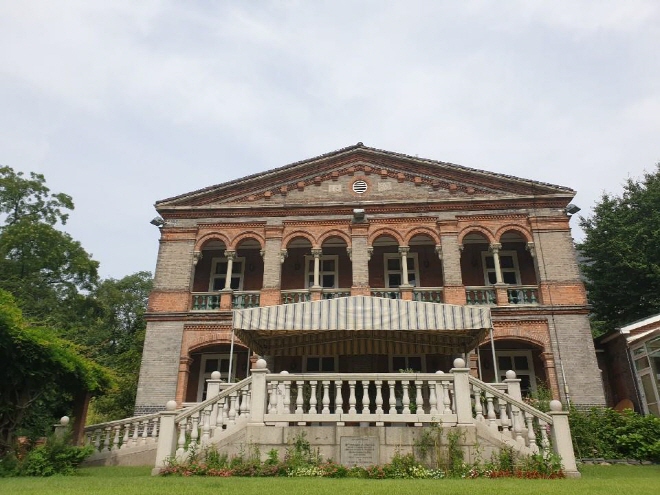 This photo, provided by the British Embassy in Seoul, captures the ambassador’s residence inside the compound, on Sept. 23, 2019.

SEOUL, Sept. 23 (Korea Bizwire) — Walking into the back of Aston Hall, a main functions area inside the office building of the British Embassy in Seoul, there is a dim space that seems somewhat unfit in a diplomatic compound.

High stools are lined up in a row along a bar, with a collection of illuminated bottles of gin and whisky.

It’s the Broughton’s Club, a tavern named after a British Royal Navy officer who first discovered South Korea in 1797 during his expedition through the Pacific Ocean.

“It’s where diplomats come and have drinks together, an establishment for networking, and to build contacts,” Deputy Ambassador Nik Mehta told a group of reporters Thursday, as he ushered them into the bar.

The British Embassy is the only foreign mission in Seoul with a pub, he added.

When a brazen bell hanging at the end of the bar rings, — and it’s usually the ambassador who rings it — it’s a signal for the last order.

“We’re open only on Friday evenings,” Mehta said with a grin.

The British Embassy, next to the royal Deoksu Palace at the heart of the capital, is among the six embassies throwing open their doors to the public in the Seoul Biennale of Architecture and Urbanism, an international arts exhibition on cities and urban issues, hosted by the Seoul metropolitan government.

Themed “Another Territory of Seoul,” the tour, running from last Friday to Sept. 29, seeks to provide a rare opportunity to the general public to explore firsthand various fields of diplomatic exchanges, according to the Open House Seoul, a nonprofit organization and the program’s co-host, on its website.

“We’re opening doors to places that are normally difficult to visit, temporarily lowering the barriers so that visitors can have a moment to enjoy the surroundings, and think about what these places mean to us,” Lim Jin-young, head of the Open House Seoul, said. 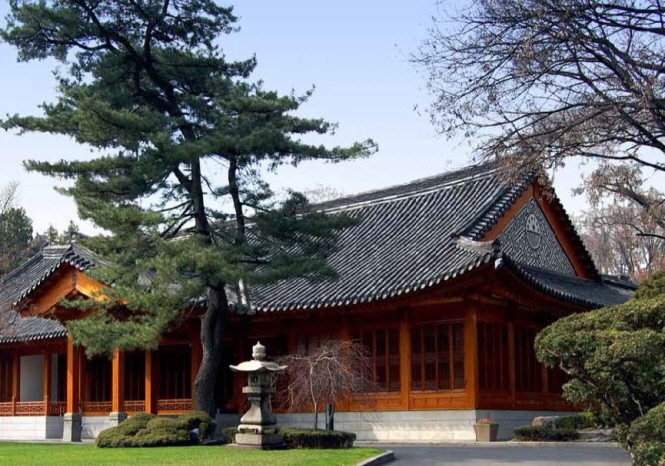 Besides Britain, the United States, France, Canada, Switzerland and Egypt have made their Seoul embassy compounds available to tour.

Most of the some 1,500 slots offered were filled in the first few days.

While that rarity may be what draws many people at first, it’s refreshing to hear the stories behind the establishment of the diplomatic compounds.

The ambassador’s residence at the British Embassy, built in 1892, is the oldest legation building in South Korea.

The Victorian-style, two-story establishment captivated the eyes of King Gojong, the last king of the Joseon Dynasty (1392-1910) when he first saw the building at its completion.

He hired J.R. Harding, a Welsh architect, to design the Seokjojeon Hall inside Deoksu Palace, the first-ever Western-style stone building where he used to throw banquets for dignitaries during his short reign as the first Korean emperor before the nation was annexed by Japan in 1910.

The residence and its front yard are used to invite guests for many diplomatic functions, notably a banquet to celebrate the birthday of Queen Elizabeth in May, and other corporate promotion events.

It is the last time for the French Embassy in Seoul to be showing off its existing structure to the public before it goes through a renovation under a restoration and extension project starting next year.

Built in 1962, the property is regarded as one of the greatest artworks in contemporary Korean architecture, especially for having embodied traditional Korean houses into its most modern form at the time.

Kim Chung-up, a renowned late Korean architect, designed the embassy’s roof with upward curving edges on the four corners, just like that of a traditional Korean “hanok” house.

Instead of using ceramic roof tiles, known as “giwa,” Kim managed to lay it out using modern construction materials, like concrete.

“It’s a French embassy compound but also has the mix of Korean sentiment and spirit,” French Ambassador to Seoul Philippe Lefort said through an interpreter.

“We’re very proud to have had such a wonderful shared cultural asset.” 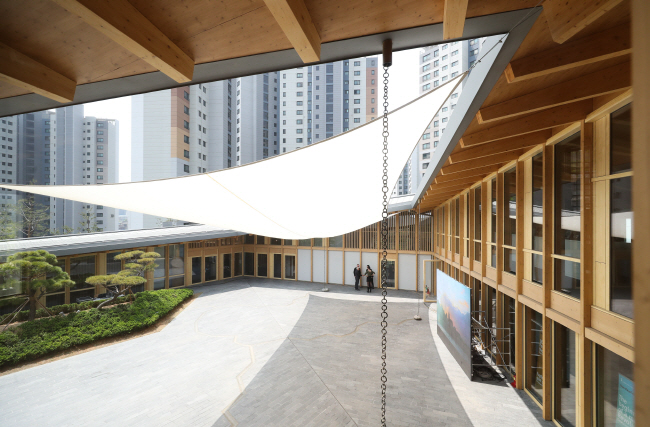 The Habib House, the U.S. ambassador’s residence, on the other hand, boasts of its elegance as a classic hanok structure on the outside, with dark ceramic tiles on the roof and wooden posts erected on cornerstones.

The U.S. rebuilt the establishment in 1974 after finding out that the building they had been using for 90 years had a risk of collapse.

Habib, then the top diplomat to Seoul, insisted that the new residence would emulate the hanok style, seen as very unconventional at the time.

The new Swiss Embassy, opened in May, is the latest version of modern interpretation of hanok by a foreign mission.

Much of the three-story complex is comprised of wood in and around the building and comes with low roofing and a large courtyard in the center — all unique characteristics of an old Korean house.

“An embassy shouldn’t just be a diplomatic reserve. Getting as close to people of the host country as possible is what the embassy does,” Swiss Ambassador to South Korea Linus von Castelmur said.

“We must reflect where we are, as a sign of respect, and I think it’s one of the ways we understand the culture of the host country.”