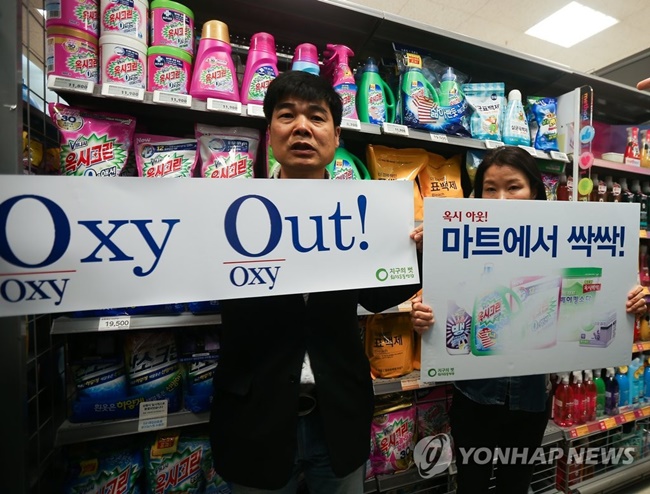 A government-led investigation later confirmed a connection between scores of people who died of lung problems and the chemicals used to clean household humidifiers. (Image: Yonhap)

Oxy Reckitt Benckiser said 52 people who have been confirmed by the Korea Environmental Industry & Technology Institute (KEITI) as victims of its toxic products will be granted the same compensation as those who have been verified as sterilizer victims in the previous two rounds of surveys.

The humidifier disinfectant case, one of the worst scandals involving a consumer product using chemicals, came to light after four pregnant women died of lung problems from unknown causes in 2011.

A government-led investigation later confirmed a connection between scores of people who died of lung problems and the chemicals used to clean household humidifiers.

Under the plan rolled out last year, Oxy Reckitt Benckiser said it will pay up to 350 million won (US$304,000) of compensation along with medical expenses and income the victims would have earned if they not were hurt or killed by its products.

For children who died or were seriously affected, 1 billion won, including 550 million won of compensation for emotional suffering, has been identically priced as their possible future income could not be calculated, the company said.

For kids who suffered minor injuries, their medical expenses and other compensation will be calculated separately, the company said.

The application for those who are willing to receive the compensation began the same day, it said.

According to the company, 162 out of 183, or 89 percent of all people who have been confirmed as victims of its products in the first two rounds of surveys, have reached an agreement with the firm over the compensation plan.

Some families of victims and members of civic groups, however, immediately denounced the announcement, saying it is an attempt to sway public opinion ahead of an appeals court’s ruling on the company and its former leaders slated for next week.

In January, a Seoul court sentenced former head of the company Shin Hyun-woo to seven years in prison for selling the products without going through due safety checks. It was the maximum penalty possible by law. The company was also ordered to pay a fine of 150 million won.