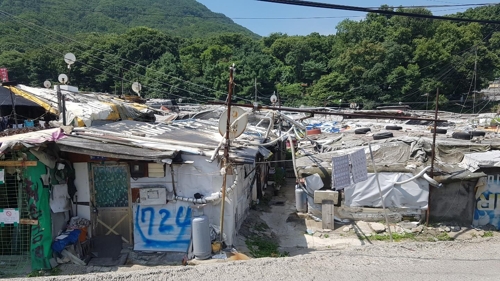 SEOUL, Jul. 20 (Korea Bizwire) – With temperatures hovering around the 35-degree mark for the last few days, South Koreans have been cranking up the air conditioning and staying indoors in a bid to escape the sweltering heat.

But for those who are less fortunate, the heat can be just as bad or even worse than the blistering cold of the winter.

For those who live in low-income areas and laborers toiling under the oppressive sun all day long, the current weather is bound to have a detrimental effect on their health.

For these folks, working in an air-conditioned space is hard to fathom, as they must put their health on the line every day to earn money and to make ends meet.

Baeksa Village in Seoul’s Junggye-dong neighborhood in Nowon-gu is one such place where residents have no choice but to bite the bullet.

Even for the very few who do own air conditioners, they are unable to turn them on even as temperatures continue to rise above 30 degrees Celsius.

One resident of the district said that she could do nothing else but to “take frequent showers and turn on the fan at times.”

For those here who survive by paying a measly rent of around 200,000 won per month atop a deposit of 1 million won, even just a whiff of cool air is a luxury.

The situation is similar in the south of the city in Guryong Village, the last shantytown in the otherwise glitzy Gangnam area.

With just a tiny alley that allows a single adult to pass through at once dividing the scores of houses in clusters, only the smallest of windows provide an outlet for the indoor heat in many homes.

Residents here were mostly seen sitting either inside or outside of their homes trying to cool down.

Lee Yeon-shim, an 86-year-old local, said that she doesn’t even turn on the fan because she wants to save electricity.

“I just take a shower,” says Lee. “People used to bring us water and ice but there is not much support like that anymore.”

Yet others, especially senior citizens, are forced to work under such harsh weather conditions in order to bring food to the table.

As they are exposed directly to sunlight and the scorching heat, they are vulnerable to the many illnesses and ailments that may result from working under such bad conditions.

A 68-year-old man referred to only as Choi, who works as a security guard at an apartment complex in Gangnam-gu’s Gaepo-dong, keeps two ice packs in the freezer and brings them to work every day.

Choi says he came up with the idea of re-using the ice pack that came with a seafood delivery because the small fan that he has at work doesn’t keep him cool enough.

Another security guard, 62-year-old Lee, holds on tight to a mini fan that his daughter gave him as a gift while chatting with a local resident.

Lee said that the larger fan at his guard post is very old and not very cooling, but he is unable to ask his supervisor to ask for a new one.

“My daughter bought me this mini fan,” says Lee smiling, “because she thought I would be too hot at work.”