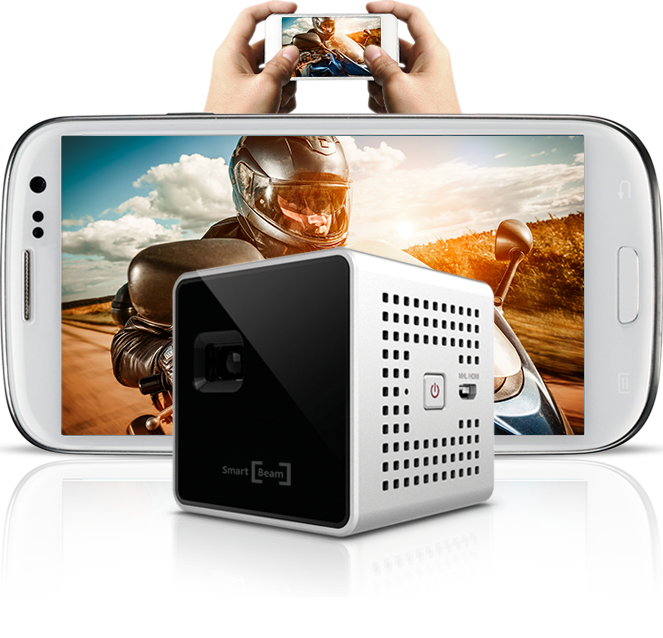 SK Telecom announced that it would launch an ultra-mini wireless pico projector for smartphones that enables the projection of images on the wall or ceiling in the second half of 2014. (image: SK Telecom)

SEOUL, Aug. 6 (Korea Bizwire) – SK Telecom plans to launch an ultra-mini wireless pico projector for smartphones. It is a follow-up model to the Smart Beam released in September 2012. With Albert and Atti, the smart robots, as well as the SmartCoin, it remains to be seen how well the new projector will fare in the market.

On August 1, SK Telecom announced that it would launch an ultra-mini wireless pico projector for smartphones that enables the projection of images on the wall or ceiling in the second half of 2014. The existing 4.6-centimeter cube-shaped projector Smart Beam needs a wire to project images from smartphones or laptops on a nearby wall. More than 100,000 units have been sold at Korean Air and Asiana Air’s in-flight duty free shops as a premium IT product until last week.

From seven countries including Germany and Japan last year to Brazil and China this year, the Smart Beam has globally been sold, which makes SK Telecom completely focus on the Smart Beam business. The company recently invested 2 billion won in co-developer Innoio, in order to purchase a 21-percent stake in the company. The sales revenue of Innoio is about 11.3 billion won and SK Telecom is the distributor of the product home and abroad.

Appcessory, a newly coined word combining application and accessory, refers to app-enabled peripheral devices performing functions of smart devices including smartphones or tablet computers. As the mobile communications market is full of competitive products, companies in the market nurture the appcessory business as a future growth engine. Until now, SK Telecom has launched six appcessory devices including smart robots and smart mirroring. Its acquisition of iriver last month is as part of this strategy, which is to secure capabilities of making various gadgets and technologies for manufacturing of its own. These moves seem to be in line with its effort to expand the business.

In late 2012, ABI Research, a New York-based market research firm, estimated that the smartphone accessory industry worldwide would amount to US$6.2 billion, or 63.2 trillion won, by 2017, an annual average growth of 10.5 percent. Digiego, a Korean research firm, estimated that the size of the local smartphone accessory industry was 1.7 trillion won in 2013.