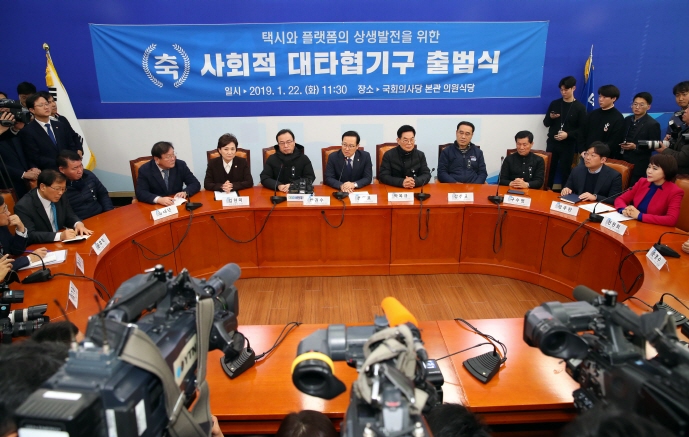 SEOUL, Jan. 22 (Korea Bizwire) — The ruling party, the government, and the taxi and carpooling service sectors launched a social dialogue body Tuesday in an effort to explore win-win strategies over shared mobility.

Taxi associations have been strongly opposed to the introduction of carpooling services by Kakao Mobility Corp., the operator of South Korea’s largest taxi-hailing app, claiming the move will put their livelihoods in jeopardy.

The move followed Kakao Mobility’s decision last week to temporarily suspend the pilot operation of its app-based carpool services and to take part in the dialogue body.

The company delayed the official launch of its app-based carpool services, originally slated for December, over the death of a taxi driver, who set himself on fire in protest against the services.

The launch was postponed last month as taxi drivers refused to join it while demanding either Kakao Mobility’s suspension of carpooling services or the ruling Democratic Party’s legislation aimed at banning such services.

“We will seek sufficient dialogue among stakeholders to ease conflicts and find ways for them to co-exist,” Transport Minister Kim Hyun-mee said.

In 1961, South Korea imposed a ban on the commercial transport by private cars, but it introduced an exception clause for carpooling in 1994 for commuting to and from work to cope with traffic congestion.

Kakao had planned to restrict ordinary people from offering carpooling services to commuters to only two time periods a day — usually during the morning and evening rush hours — in line with the current law on passenger transport service.

“Only after tackling the issue of the carpool services will we be able to find solutions to overall problems in the taxi industry,” said Park Bok-kyu, the chief of a major taxi association. “Highlighting issues of taxi drivers’ welfare and salary overshadows problems linked to carpooling.”

Jung Joo-hwan, head of Kakao Mobility, expressed hope that the new body will pave the way for finding a good solution to shared mobility.

“I believe that the taxi and mobility sectors could grow together if the taxi industry embraces innovative platform technology,” he said. “To this end, bold steps to overhaul old regulations are needed.”