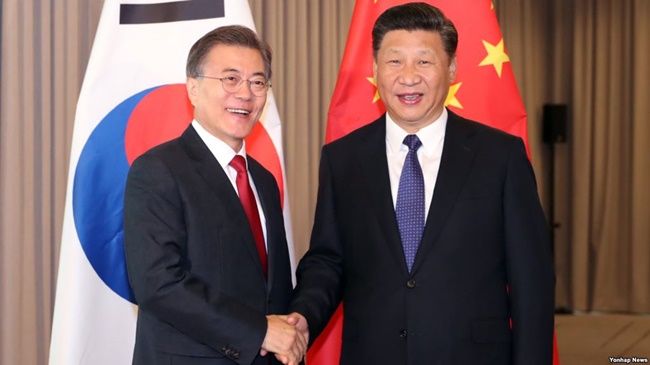 According to government sources, plans for a South Korea-China summit meeting and an official statement from the South Korean government in response to the THAAD controversy will be announced sometime this week. (Image: Yonhap)

SEOUL, Oct. 31 (Korea Bizwire) — South Korean and Chinese government officials are communicating through diplomatic channels to solve the issue of the deployment of THAAD anti-missile systems in Korea, ahead of this year’s APEC meeting in Vietnam next month.

According to government sources, plans for a South Korea-China summit meeting and an official statement from the South Korean government in response to the THAAD controversy will be announced sometime this week.

A senior official at the Blue House on Sunday said, “Prior to the APEC Summit, where the leaders of South Korean and China will meet, both countries are trying to approach the THAAD issue from various angles to ease the discord, while active discussions are being had between senior officials.”

The official, while saying that the South Korean government would adopt a “wait-and-see” attitude, also warned against drawing any conclusion at this point.

Another source close to the Blue House called the resolution of the issue surrounding the THAAD missile defense systems a ‘necessary prerequisite’ to a meeting between the two countries at the APEC Summit in early November, while acknowledging that government officials from both countries are working closely to find common ground.

“Given the time required to prepare for a summit meeting, the plans are expected to be announced sometime this week, with the result of diplomatic efforts expected to be made public also. As this week is a crucial point, we can just wait and see for now,” the source said.

Media reports have stated that the two countries are focusing on resolving the issue of THAAD systems so as to allow the meeting during the APEC Summit to be future-oriented and focusing on cooperation.

Following the reports, speculation is growing that if South Korea and China resolve the THAAD issue, the two countries won’t be discussing the politically-charged missile defense system during the APEC Summit.

The South Korean government is expected to reaffirm its support for the U.S. anti-missile system, while acknowledging the concerns of the Chinese government.

“If both countries are able to reach an agreement on the THAAD issue, the summit meeting will be held in a friendlier atmosphere,” one diplomatic source said, while others have expressed concern that a lack of agreement prior to the meeting could see the leaders of the two countries avoid discussing the topic next month.