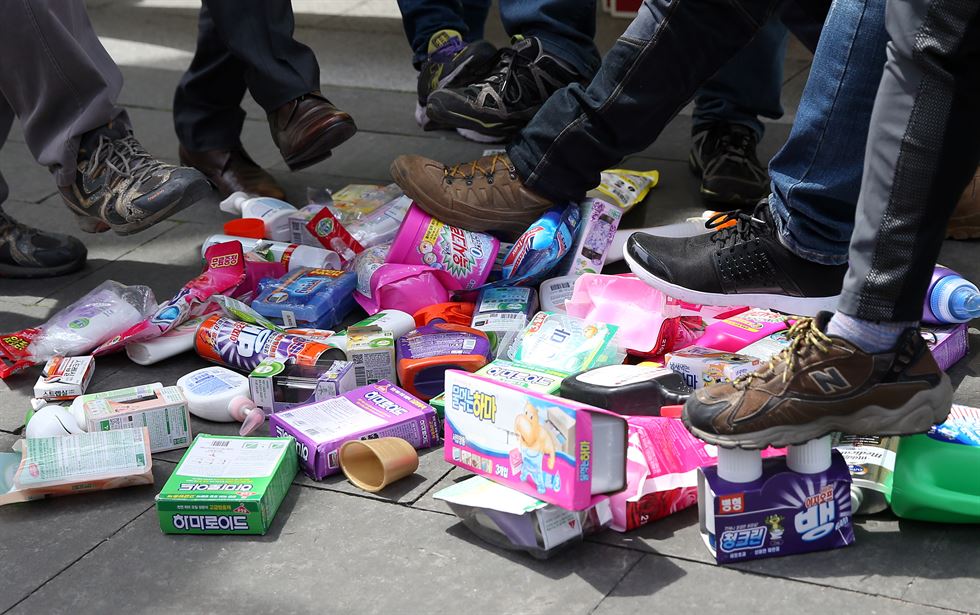 Victims and members of environmental organizations trample Oxy products as part of their protest on April 28, 2016, in front of the International Finance Center Seoul. (image: Yonhap)

SEOUL, May 19 (Korea Bizwire) – If there was one thing that South Koreans took away from the Oxy Reckitt Benckiser crisis, it was the devastating effects of chemical substances found in everyday products.

The scandal dates back a decade, when polyhexamethylene guanidine (PHMG), a substance that was used in commercial humidifier sterilizing agents, was discovered to be the primary cause of a lung disease outbreak between 2006 and 2011, allegedly killing hundreds.

Reckitt Benckiser, one of the companies that sold sterilizer products containing PHMG, refused to take responsibility until May 2016, when it acknowledged the toxicity of the disinfectant for the first time. Investigations are still ongoing to substantiate the relationship between the disinfectants and victims that have yet to be officially recognized.

The South Korean government had confirmed at least 113 deaths, including infants, as of January of this year, although victims’ organizations and a civic investigation committee estimate that there have been over 1,000 deaths, and roughly 8 million were exposed to the chemical when the products were in distribution.

The tragedy has not only brought about unrelenting criticism of corporate negligence, but also shed a new light on the harmful effects of hundreds of chemical substances included in consumer products used every day.

South Korean consumers have grown anxious, and are more cautious than ever as they fill up their shopping carts. A new group of consumers has emerged, calling themselves NoChemis (no chemicals) or even NoPoos (no shampoos), insisting on “green labels” and hunting for eco-friendly, or organic and natural alternatives.

The Korean Women’s Environmental Network, for instance, is constantly on the lookout for potentially harmful chemicals found in daily products, from laundry detergents to sanitary pads. The organization also hosts lectures and workshops, open to the public, educating consumers on an eco-friendly lifestyle that effectively reduces the ‘body burden’ – the physical burden resulting from an accumulation of toxins. 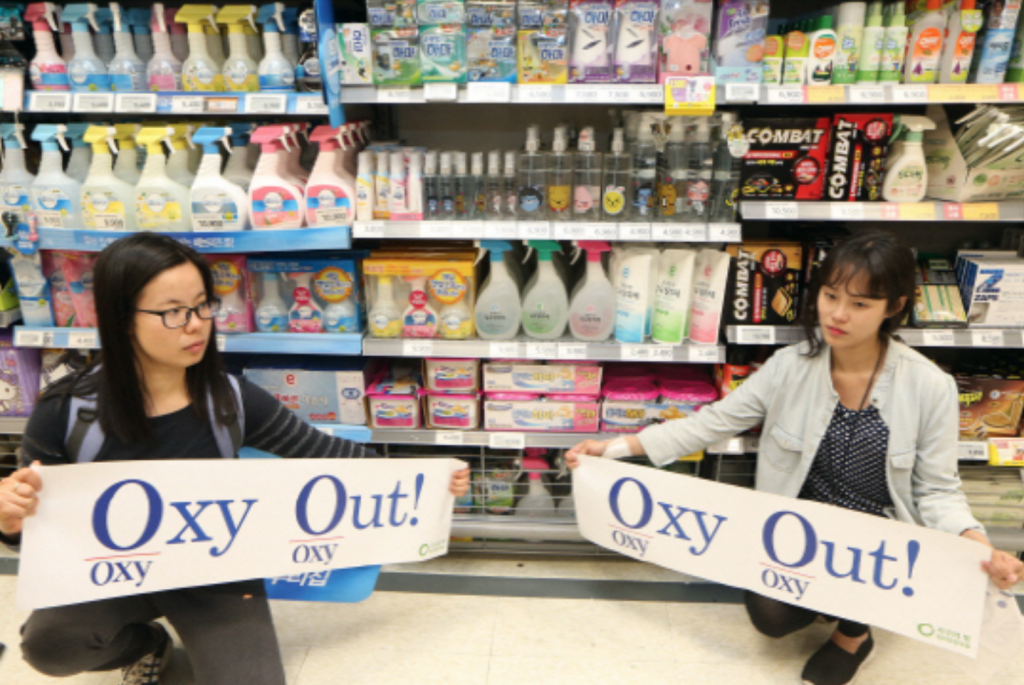 According to SK Planet’s ecommerce site, 11st, sales of environmentally-friendly and natural dish detergents soared by 79 percent from March 2016 to March 2017, compared to the previous 12-month period. The site saw a similar uptick for air-purifying plants (48 percent) and cloth diapers (53 percent).

Another online shopping mall, Gmarket, said its year-on-year sales of cotton sanitary pads rose by 35 percent in 2016, baking soda (by Aekyung Petrochemical) for cleaning by 35.6 percent, and air-purifying plants by 49 percent.

“We continue to see more customers looking for eco-friendly or natural products after last year’s news reports on potentially hazardous products,” said Lee Kyu-hoon, a junior manager at 11st. “As for dish detergents, high-quality hypoallergenic and environmentally-friendly products tend to be most popular.”

Although businesses are gradually adapting to the change in demand, labelling their products with slogans like “chemical free,” “green,” or “all-natural,” experts claim that not all chemical-containing products are necessarily harmful all the time.

“What suits one best depends on individual consumers, but businesses tend to emphasize ‘natural’ as part of their marketing efforts,” the official said. “For instance, ethanol is used to give a cooling sensation and allow products to be absorbed more quickly. It’s just a matter of perception, and it really doesn’t matter if it’s used or not.”

“In fact, neglecting the means to protect the cosmetics, which constantly come in contact with the air and skin, from outside microbes can be more damaging,” the researcher said.

According to Kwak Geum-joo, a Seoul National University professor of psychology, the emerging “chemi-phobia” is a natural phenomenon that is likely to persist into the near future.

“Humans are not so rational, and we have a strong tendency to sympathize with others, which means we’re more easily swayed by brand image than the actual details of the products,” she said. “Once consumers associate a negative idea with a particular kind of merchandise, it’s very difficult for them get over it.”

She also added that South Koreans are becoming increasingly aware of such issues as the country becomes more affluent. “South Korea is experiencing a transition period where insensitivity and obsession with consumer safety coexist.”