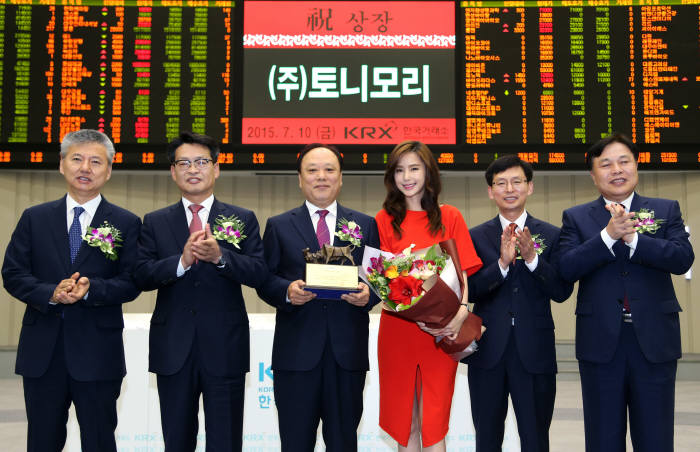 Tonymoly, a mid-end cosmetic brand, holds a ceremony to celebrate the listing its shares in the main KOSPI market on July 10, 2015, along with officials of the Korea Exchange. (image: Korea Exchange)

SEOUL, Jul. 10 (Korea Bizwire) — South Korean cosmetic maker Tonymoly almost doubled its initial public offering (IPO) on Friday, but erased part of its earlier gains over a mixed outlook on its bid to tap deeper into China as a new growth engine beyond the saturated domestic market.

Buoyed by a strong rally of cosmetic shares earlier this year, its listing has drawn keen attention from retail investors. Its shares were 771 times oversubscribed last week.

Tonymoly, the nation’s seventh-largest cosmetic brand by 2014 sales, has posted double-digit growth since its establishment in 2006 and has about 1,800 shops in 20 nations, including Hong Kong, the United States and Russia.

China’s cosmetics market is the world’s third-biggest market, worth $26 billion a year, global market researcher Euromonitor said, expecting it will grow 8 percent each year from now to 2017.