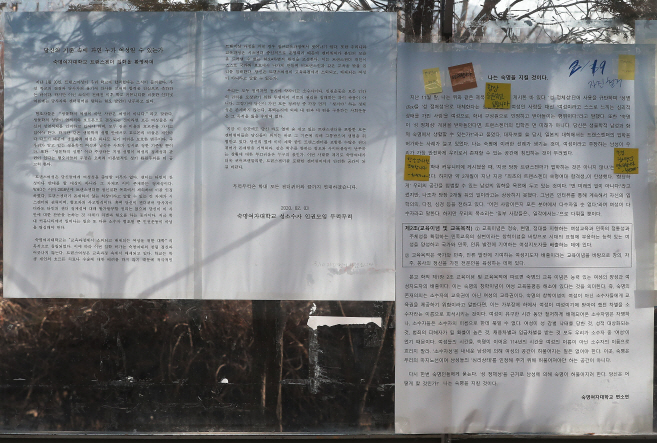 The handwritten posters supporting (L) and opposing (R) acceptance of transgender student are posted at Sookmyung Women’s University in Seoul on Feb. 6, 2020. (Yonhap)

SEOUL, Feb. 10 (Korea Bizwire) — A transgender individual who was accepted to Sookmyung Women’s University’s Law School after undergoing sex change surgery last year has decided to withdraw her application after being subjected to a torrent of hate speech from some students.

In the meantime, some students’ ridicule and accusations against the transgender student were found to have continued despite the fact that the student has chosen to withdraw.

The transgender student at the middle of the controversy posted a message on the online community of Sookmyung Women’s University last Friday expressing her wish to give up her place at law school.

More than 100 comments had flooded the message board only an hour after the initial post.

One student wrote in a comment, “How does society move forward when all one needs is to pretend to be unhappy and ask for pity?”

Another student said, “To us, you are just an outsider Korean man. You are a scary and terrifying figure to us.”

In addition, most of the comments mocked the student, such as “Go to a mental hospital” and “I do not care what you do, leave the community.”

“My life is constantly ignored and opposed in other people’s daily lives,” the student in question said in an earlier statement. She added that “I am taking control of my life and my rights, which are something that others take for granted.”

“I thank the individuals and organizations who have offered messages of encouragement for their support and sympathy for my desire to create a society that can embrace various values,” she said.

“I believe and appreciate that although my story stops here, others will be able to move further in the future.”

“I wanted to show that transgender students can apply and enter women’s colleges in a confident manner,” the woman said after she finally passed the college entrance exam.

“I hope other transgender people who want to enter a women’s university will be encouraged by looking at me,” she said.

Before the woman made the decision to give up her admission, however, some students continued to say in SNS group chat rooms, “I think it is an insult to women’s education that a transgender person tries to get public attention and sympathy for her courage in the face of entering a women’s university.”