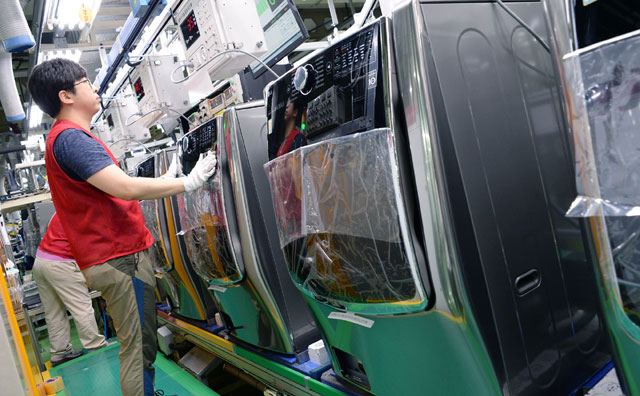 The U.S. International Trade Commission said it is recommending a 50 percent tariff rate on large residential washers built by Samsung and LG, and exceeding a quota of 1.2 million units.

The recommendation comes in response to a safeguard petition filed by U.S.-based Whirlpool in May. The commission determined last month that the Samsung and LG washers were having an adverse impact on the domestic industry.

Whirlpool had demanded a flat tariff rate of 50 percent on all units, along with quotas on imported parts. Samsung and LG counterproposed a 50 percent tariff on units exceeding a quota of 1.45 million.

The recommendation will be sent to President Donald Trump by Dec. 4, and he is expected to make a decision early next year. On units below the quota line, the commission said it offered two different options — a tariff rate of zero percent or 20 percent.

If Trump approves the safeguard measures, it will be the first such action since 2002, when the George W. Bush administration imposed an 8-30 percent duty on imported steel.

The new measure would apply only to Samsung and LG washers manufactured overseas, not in South Korea.

South Korea has argued the restrictions could hurt the U.S. by limiting American consumers’ choices and undermining operations at two South Korean-built washer plants that are scheduled to go online by 2019.

The two companies exported a combined $1 billion worth of large residential washing machines to the U.S. last year, holding 16 percent and 13 percent, respectively, of a market that is led by Whirlpool with 38 percent.

“We continue to believe that no remedy is necessary since our South Carolina factory will begin producing washing machines in early 2018. We’ve already hired 350 people, who are preparing our factory for production in January, and we are on track to fill another 150 manufacturing jobs in South Carolina by the end of the year,” Samsung said.

The South Korean electronics giant urged the Trump administration not to impose any measures that would harm workers.

LG Electronics also expressed regret over the ITC’s recommendation, saying that the safeguard, if implemented, would harm American consumers, as well as retailers.

“The recommendation (by the ITC) would limit U.S. consumers’ rights and weaken South Korean firms’ presence in the U.S.,” it said.

LG is working on the construction of a washer plant in Tennessee.

In August, the company said it will invest US$250 million in the plant, whose construction is expected to be completed in the first quarter of 2019. The plant will have an annual production capacity of 1 million units.