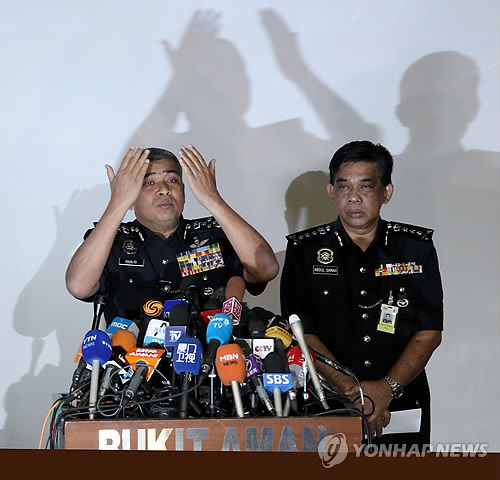 Malaysia’s national police chief Khalid Abu Bakar tells reporters on Feb. 22, 2017, in Kuala Lumpur that two more North Koreans, including a diplomat, have been identified as suspects involved in the death of the half brother of the North’s leader Kim Jong-un. (image: Yonhap)

Traces of the lethal VX nerve agent were found on the North Korean’s face and eyes, according to a preliminary assessment released by the Chemistry Department of Malaysia, a police statement said.

Kim Jong-nam, the first son of late former leader Kim Jong-il, was killed at an airport in Malaysia on Feb. 13 after two Asian women allegedly wiped a toxic substance on his face.

VX, one of the most toxic chemical substances in the world, is an oily, amber-colored liquid that is tasteless and odorless, according to the website of the U.S. Centers for Disease Control and Prevention. Exposure to the agent can cause death in minutes, it said.

The agent is listed as a weapon of mass destruction by the United Nations and its use is banned under the Chemical Weapons Convention, to which North Korea is not a signatory.

Police said Wednesday that the two female suspects — Vietnamese and Indonesian — were aware that they took part in the attack and smeared the chemical on Kim’s face with their bare hands but claimed they were deceived into thinking that they were part of a comedy show. The two women washed their hands after the attack.

One of the female suspects, who has been detained, fell ill after the killing and has been vomiting, police were quoted as saying by AFP.

Malaysian police said that besides the two women, a total of eight North Koreans are suspected of being involved in Kim’s murder.

Four North Korean men fled Malaysia on the day of Kim’s death and are now believed to have escaped to Pyongyang. Police arrested a North Korean man while looking for three others, including a diplomat and an employee at Air Koryo, the North’s flag carrier.

South Korea said that it is highly likely that the North Korean regime is behind Kim’s killing. North Korean leader Kim Jong-un issued a standing order to kill his brother after assuming power in late 2011.

In its first official response, North Korea said Thursday that Malaysia colluded with South Korea in its investigation into the killing of Kim Jong-nam, claiming that Seoul is masterminding an anti-North Korea conspiracy.

North Korea claimed that the dead man is Kim Chol, the name on a passport held by Kim Jong-nam. The North’s state media said that a North Korean citizen carrying a diplomatic passport fell into a state of “shock,” without making any reference to his identity.

South Korea’s unification ministry called on North Korea to admit that it took part in killing Kim Jong-nam and to cooperate with the Malaysian police’s probe.

“North Korea will see its international image further worsen (if it continues to deny the allegation),” Jeong Joon-hee, a unification ministry spokesman, said at a regular press briefing.

North Korea is presumed to possess about 25 chemical agents including six nerve agents such as sarin and VX, according to a 2016 report by the Korea Institute for Defense Analyses.

Pyongyang is estimated to also have 13 types of pathogens such as anthrax and clostridium botulinum that can be used as biologic weapons, it said.

In 1987, the country became a signatory to the Biological Weapons Convention which bans the development, production, stockpiling and acquisition of microbial or other biological agents as well as biological weapons.

The North is presumed to run 17 institutes dedicated to researching biological weapons and developing microbial or other biological agents, according to the South Korean military.

The South Korean military believes North Korea’s stockpile of chemical weapons totals 2,500 to 5,000 tons making it the third-largest after the U.S. and Russia.

Meanwhile, Malaysian police dismissed a report saying that they will send officers to Macau to collect DNA samples from Kim Jong-nam’s son.

Police said that one of Kim’s family members should come to Malaysia to identify and claim Kim’s body.

There was speculation that Kim Han-sol, the son of the dead man, had probably arrived in Malaysia on Monday from Macau to claim his father’s body. But Malaysian police said Wednesday that no family member had come forward.