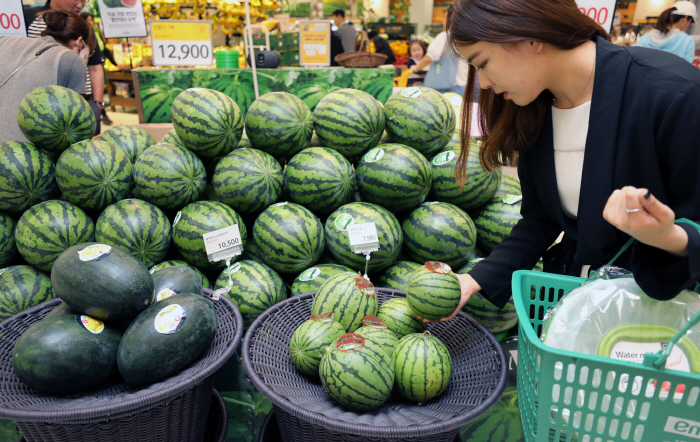 BUSAN, Jun. 5 (Korea Bizwire) — Watermelon, a best-seller in hot summer weather at large discount store, is found to show a huge difference in sales depending on how it is sold and what type of watermelon it is.

According to Emart Inc. on Tuesday, out of six stores in Busan from April 1 to May 28, whole watermelons were most popular at the company’s Haeundae branch, where sales were 46 percent higher than the average of the six stores.

However, in the case of cut watermelon, which is sold in one-half or one-quarter sizes, consumption patterns are different.

During the same period, the Munhyeon branch sold the most cut watermelons, amounting to about 1,000 pieces, 83 percent more than the average of the six stores.

Emart said that the different spending patterns occurred because the number of single-person households is high in Munhyeon-dong due to the concentration of offices such as international financial complexes near Munhyeon branch.

In fact, according to data from Statistics Korea, the portion of single-person households in Dong District and Busanjin District, adjacent to Emart’s Munhyeon branche, stood at 35.7 percent and 33 percent, respectively, the second highest among 16 districts and counties in Busan.

On the other hand, Haeundae branch, which had the largest number of whole watermelon sales, accounted for 47.1 percent of households with three or more family members, the highest among the regions where Emart stores are operating, as well as the Busan average, 43.1 percent.

“Since watermelon is the top-selling product in the food section at summer, consumers are showing more sensitive and distinctive spending patterns,” an Emart official said.

“This is why analyzing spending patterns for watermelon can reveal the demographics of a neighborhood.”