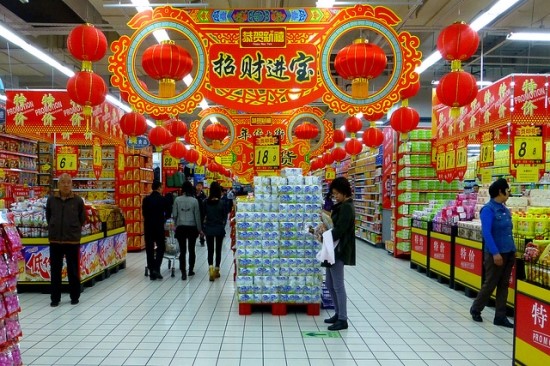 The tariff rates for major export items such as beverages, red ginseng, and gim (laver) are 15 percent or more. Including the 17-percent value-added taxes to be paid at the customs clearance process, the actual tax rates is as high as 35-60 percent.(image:dcmaster/flickr)

SEOUL, July 24 (Korea Bizwire) – In a situation where the Chinese food market has emerged as a new opportunity for Korea’s food exporters, their share in the vast market still falls short of a little more than 1 percent.

According to a report “Strategy to Break the Barriers to the Chinese Food Market” published on July 22 by the Beijing office of the Korea International Trade Association, China’s food import market has increased 12-folds for 13 years from US$8.25 billion in 2000 to $95.08 billion in 2013, with an annual average growth rate of 20.7 percent.

During the same year, Korean food exporters have increased their export volume to China six-folds to $700 million from $120 million. Still, their market share is below the 2 percent level. The report suggested that Korean food exporters increase their non-price competitiveness as a way to overcome non-tariff barriers such as product certification in the areas of safety and hygiene.

The tariff rates for major export items such as beverages, red ginseng, and gim (laver) are 15 percent or more. Including the 17-percent value-added taxes to be paid at the customs clearance process, the actual tax rates is as high as 35-60 percent.

Another problem for Korean food exporters is that they are unable to respond to China’s food regulations. For example, the Chinese authorities assess widely different tariff rates depending on whether a drink is milk-based or not. They consider any drink with less than 80 percent milk as a non-milk product and charge a higher tariff duty.

Strawberry-flavored milk exported by a Korean company contained only 40 percent of milk and was classified as a non-milk beverage, which was subject to a 35-percent tariff instead of the usual 15-percent tariff assessed on milk-based drinks.

In addition, the Chinese government classifies any ginseng older than five years or red ginseng (ginseng products made of 6-year-old ginseng) as health products and mandates to earn certifications with the China Food and Drug Administration.

To win certifications with the CFDA takes more than two years and costs more than several thousand dollars. Even for exporters of red ginseng tea packs and ginseng candies were advised to get certifications with the drug authorities. That means Korean exporters need to be extra careful when trying to export to China and check all the necessary regulations before doing so.