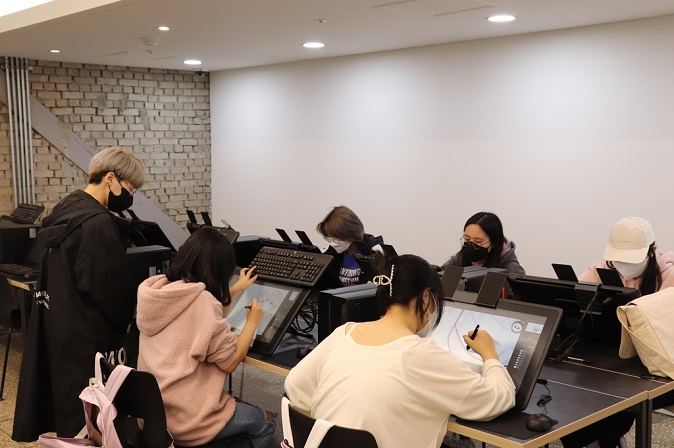 Student are practicing drawing in this photo provided by Seoul Webtoon Academy.

According to a report that Rep. Yoo Jung-ju of the Democratic Party received from the Ministry of Culture, Sports and Tourism, 30.3 percent of 871 surveyed webtoon artists said that they had signed unfair contracts.

In addition, 44 percent of the respondents said that their acquaintances or colleagues had also experienced unfair contracts.

Among the unfair practices that webtoonists experience during the contract process, ‘unilateral contracts’ accounted for the largest share at 78.8 percent, followed by ‘rejection of amendments before signing contracts’ at 61.7 percent, ‘discriminative treatment’ at 59.5 percent, ‘unfaithful revenue reporting’ at 58 percent and ‘low payment or delay in payment’ at 45.1 percent.

For the unfair practices that they experience during the creation process, ‘repetitive revision requests’ was the most common with 55.7 percent of the respondents saying they had been affected, followed by ‘discrimination in marketing and promotion’ at 50.4 percent, ‘unfair intervention in planning and creation’ at 50.4 percent, and ‘unreasonable requests for reduction of working hours’ at 37.9 percent.

As for the practice of signing a contract on the use of secondary works at the same time as the first serial publication contract was signed, 67.7 percent of webtoon artists said that it was not fair.