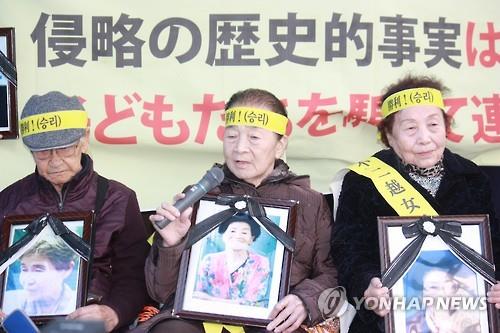 Elderly Korean victims of Japan’s wartime forced labor stage a protest rally calling for an apology and compensation in front of Nachi-Fujikoshi Corp. headquarters in Tokyo on Nov. 27, 2015, in this file photo. They are holding the pictures of their colleagues who have passed away. (Yonhap)

SEOUL, Jan. 18 (Korea Bizwire) — A Seoul appellate court on Friday upheld damages claims by another group of South Koreans forced into wartime labor and ordered a Japanese firm to compensate them.

The Seoul High Court retained the lower court’s ruling that ordered the Nachi-Fujikoshi Corp. to pay 80 million won to 100 million won (US$71,300-$89,000) to 27 surviving victims and families of those who have died.

The victims in Friday’s suit filed litigation accusing Nachi-Fujikoshi of forcing them to toil at a factory in Toyama in the early 1940s, without pay and under poor working conditions. Korea was under Japan’s colonial rule from 1910-1945.

Fujikoshi was accused of deceiving 1,000 Korean girls aged 12-18 into volunteering at munitions factories during World War II, promising them that they would earn a lot of money in the future.

They sued the company in Japan in 2003, but the Japanese court ruled in favor of the Japanese firm, saying all reparation issues regarding the colonial period were settled in a 1965 treaty signed by Seoul and Tokyo.

The victims brought the case back home and continued their legal fight here after South Korea’s top court ruled in May 2012 that Nippon Steel and Mitsubishi must compensate the plaintiffs as the 1965 pact does not terminate individual’s rights to claim damages. The Japanese firms appealed the rulings.

The forced labor cases were all held up at the top court until October of last year, when the top court finally handed down its landmark ruling.