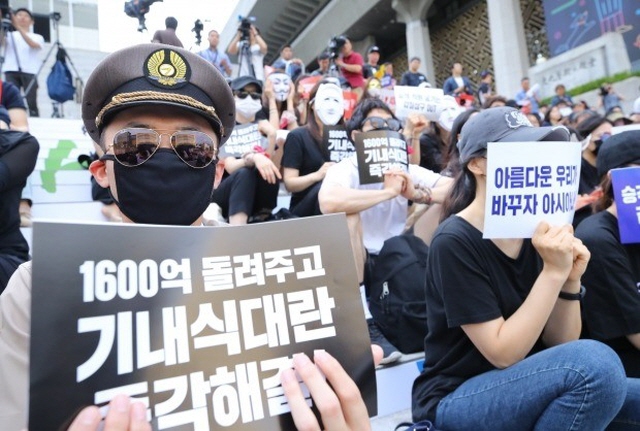 SEOUL, Jul. 6 (Korea Bizwire) — Employees at Asiana Airlines Inc. gathered in central Seoul late Friday to stage a candlelight vigil denouncing the firm’s top management for massive in-flight meal service disruptions that resulted in the suicide of the head of a caterer’s supplier.

The latest rally follows two similar demonstrations held by staff at Asiana’s bigger rival Korean Air Lines Co. in early May, at which they blamed the founding Cho family for years of habitual bullying and assaults on employees and others that have led to prosecution investigations.

The Asiana branch of the public transportation labor union said the rally began at 6 p.m. in central Gwanghwamun. It notified local police of the plan on Wednesday and that more than 300 people are expected to attend, it said.

The rally comes after 110 flights run by South Korea’s second-largest carrier took off this week without meals provided to passengers due to a delay in meal supplies that arose from problems with Asiana’s new caterer.

A fire at the new caterer’s factory caused the food delay, prompting Asiana to sign a temporary contract with another caterer whose production capacity fell far short of the carrier’s demand.

The head of a company that supplied packaging service to the makeshift caterer killed himself on Monday. Police quoted his family as saying that he had been under extreme stress.

The no-meal fiasco led its chairman Park Sam-koo to apologize to the public in a press briefing on Wednesday, with the company announcing later that meal services in all flights are back to normal as of Thursday.

But Asiana said meal services have yet to be fully normalized, though “basic meals” were being served on all of its 77 international flights Friday.

Protesters urged Asiana management, including the chairman, to take full legal and moral responsibility for the meal disruptions and call on top executives to step down.

“It was a company that we had been proud of but a wrong decision by an individual and a mistaken decision intended to curry favor with the person has led to the current in-flight meal chaos,” a company worker who joined the protest, said.

“This demonstration was arranged thanks to a unified commitment that we will not stand and succumb to it any more,” he added. “This will continue until the person held accountable (for this chaos) says ‘I was wrong and will step down.’”

The dress code for the protest was said to be any black outfit or an Asiana uniform, the organizers said. They also wore Guy Fawkes masks to hide their identities, following the example of previous Korean Air rallies.

They plan to hold another rally on Sunday.

Meanwhile, the transport ministry said Monday it will closely monitor the in-flight meal services until they are normalized and will look into Asiana’s compensation program for passengers who traveled without meals to see if the program are reasonable or not.

Asiana said it will pay compensation to passengers who were not served meals on their flights and suffered delayed departures this week.