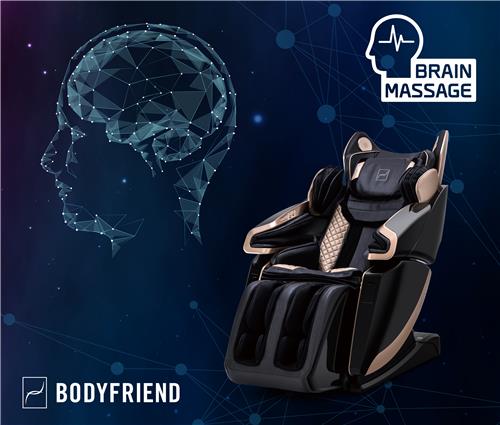 At a press conference yesterday at the Four Seasons Hotel in Seoul, Bodyfriend introduced the massage chairs equipped with the brain massage function.

According to Bodyfriend, the brain massage helps users feel calm and increases cognitive skills by stimulating the senses of touch and hearing.

“It’s a new technological concept that has not been developed by any other company,” said an official at Bodyfriend, adding that the massage chairs had been patented and clinically proven with “relevant research having been published in a renowned academic journal.”

In addition, the program offers a physical massage that stimulates the brain and induces rest.

The massage program has two types. The first is aimed at increasing concentration, while the second focuses on calming the mind.

The research and development center operated by Bodyfriend tested the massage chairs on 25 healthy adults between the ages of 20 and 25 by measuring their brainwave levels and cognitive skills.

The results found that participants who used the brain massage function while enjoying their rest had much lower levels of fatigue and were able to concentrate for longer periods, according to the results of the brainwave indicator.

However, memory skills related to languages improved only for participants who had received the brain massage.