“The rate cut and the expansion of the loan facility cap (for smaller firms) were based on the judgment that growth and inflation is likely to significantly underperform the expected course. We judged that there is a need to implement additional measures before forecasts are released in order to strengthen growth momentum and ultimately expand growth potential.”

“Of course there are downside risks on exports, such as China’s slowing growth and the won’s appreciation. However, domestic demand, especially consumption, seems to be limiting economic recovery. We’re not thinking negatively that the economy will fall into a recession or deflation. Even if we further revise down the forecast, we sustain the view that our economy will gradually recover going forward.”

“The Bank of Korea will take account of all relevant data rather than simply tracking the U.S. Federal Reserve’s movement. We will not immediately start hiking (the base rate) just because the U.S. starts hiking the rate. 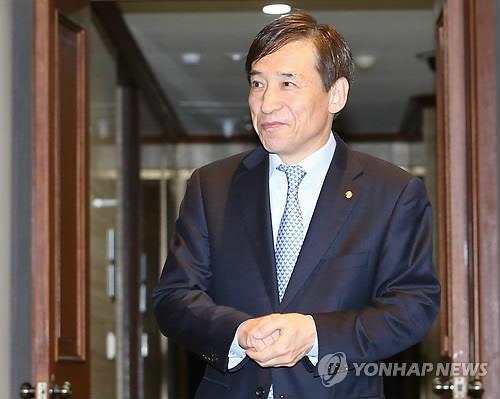 In a surprise move on March 12, the Bank of Korea (BOK) cut the benchmark interest rate to an all-time low of 1.75 percent as its policy efforts — two rounds of rate cuts each in August and October — have failed to produce desirable results.

Last week, the central bank also raised the ceiling on loans extended to smaller firms through commercial lenders to 20 trillion won (US$18 billion) from 15 trillion won last week in efforts to spur growth.

“The rate cut and the expansion of the loan facility cap (for smaller firms) were based on the judgment that growth and inflation is likely to significantly underperform the expected course,” BOK Gov. Lee Ju-yeol told reporters in a luncheon to mark his first year in office.

Lee’s remarks come as the market is betting that the central bank will trim its outlook on both growth and inflation on April 9 when it releases its latest economic updates. The BOK revises its economic outlook every three months: in January, April, July and October.

The BOK governor cited sluggish domestic demand as the biggest factor that is hampering growth.