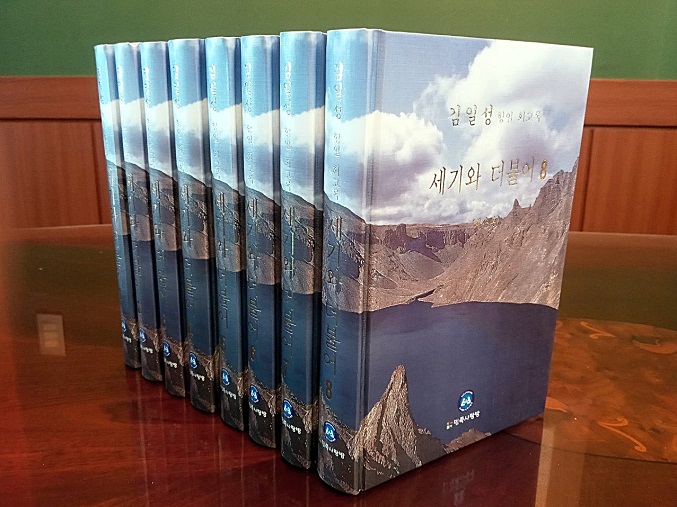 On Wednesday, a local publishing company said it has begun selling the memoirs, titled “With the Century,” here for the first time since the books were published by the North Korean regime in the early 1990s.

The memoirs, which mostly feature Kim’s anti-Japanese fight, have sparked controversy as they are known to contain many fabrications about his life. The North’s founder is the grandfather of current leader Kim Jong-un.

In the 1990s, a South Korean publisher tried in vain to sell the books here and came under investigation for allegedly violating the National Security Act.

In a meeting held Friday, Kyobo Book Center decided to ban sales of the series and remove the memoirs from its online bookstore, according to sources.

“Considering a Supreme Court ruling that found that readers who purchase books violating the National Security Act can also be punished, we decided not to receive new orders to protect customers,” a company official said.

The official, who explained that the decision was focused on protecting the customers rather than being affected by the political controversy, said the company will decide on resuming sales after decisions are made by the court or a national publication agency.

The bookseller on Thursday removed three volumes of the series from its bookstores in central and southern Seoul, as well as its logistics center, and returned them to a publishers’ association that is responsible for its distribution.

The head of the memoirs’ publisher said he is willing to cooperate with the police or the Unification Ministry on the issue, if necessary.

“I thought it was okay since South Korea does not run a permit system for publishing, but feel sorry that the controversy has grown bigger,” Kim Seung-kyun said in a phone interview with Yonhap News Agency, saying that Kim’s anti-Japanese moves should be recognized.

The 82-year-old, who formerly served as the head of a civilian organization promoting inter-Korean exchange, currently runs a small company specializing in trade with North Korea.

The publishers’ association, meanwhile, said it has no grounds so far to stop distributing the memoirs, without the publisher’s request or a legal decision.

Some 100 volumes of the series have reportedly been distributed through the association, including 10 that were sold at Kyobo.

A search on major online booksellers Yes24 and Aladin, meanwhile, show that the memoirs can be bought for shippings that begin on Friday and Thursday, respectively.