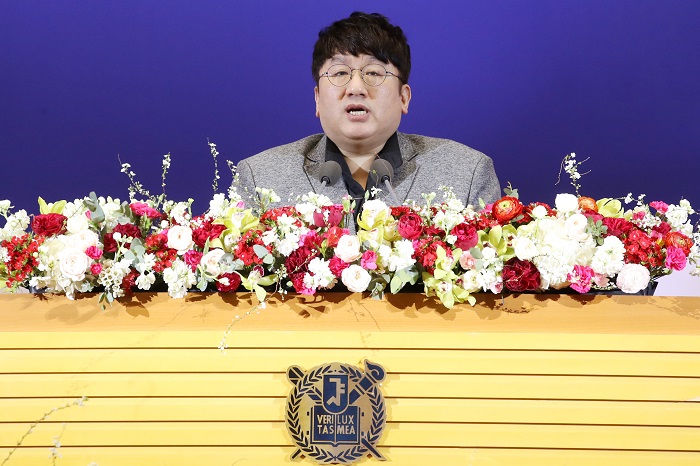 Big Hit Entertainment CEO Bang Si-hyuk reminisced that he did his best as if every day was his last day without compromising on the need to create the best content. (image: Yonhap)

During his speech, Bang explained that he did not have a dream, rather he had anger as a driving force.

Bang, who graduated from Seoul National University in 1997, started his speech by asking the audience how he looked in a TV program ‘Star Audition: The Great Birth’.

He acknowledged that he did not look good when he got angry with some of the participants.

Although being angry did not look good, Bang explained that it was a good example to show that he could use anger as a force for good.

Bang reminisced that he did his best as if every day was his last day without compromising on the need to create the best content.

Furthermore, he explained how singers in the music industry are being treated wrongfully, and that he is still fighting for musicians to be treated and assessed fairly.

After his story, Bang warned the graduates that they would face injustice and irrationality in the course of life and that when it happened, he hoped everyone would use their anger as a force for change in society by fighting against irrationality.

In addition, he told graduates not to follow dreams and goals set by others, but rather to set their own goals based on common sense to contribute to society.

He continued by explaining what it means to be a graduate of SNU, noting how often SNU graduates are perceived negatively in Korean society.

He stressed that all graduates prove the negative perception to be wrong by contributing to their community, to the socially weak, and to the nation.

He finished off the commencement ceremony by encouraging graduates to focus on what they wanted to achieve, and working hard until their goals were met.