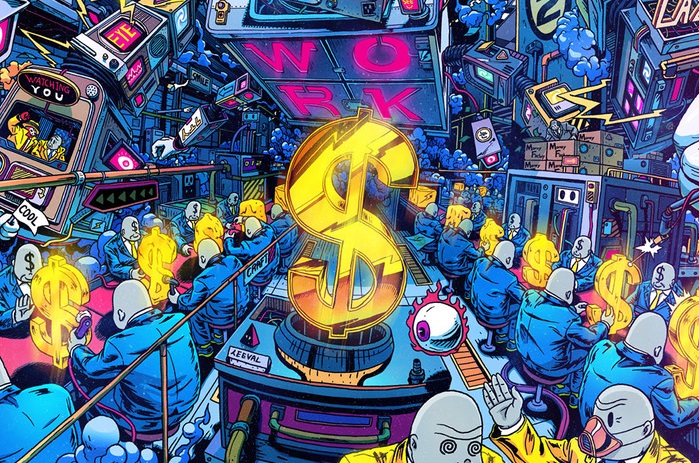 The digital artwork provided by Mr. Misang on May 12, 2021, is “Money Factory” from his “Modern Life is Rubbish” series.

SEOUL, May 13 (Korea Bizwire) — When contemporary artist Mari Kim was suggested to “mint” one of her artworks to sell it as an NFT, she did not hesitate.

“The sooner, the better,” she thought to herself.

NFTs, or “non-fungible tokens,” have taken the global art world by storm, with artist Beeple’s digital work fetching a whopping $69.3 million at a Christie’s auction in March, the third-highest price achieved by a living artist.

And they have started to take off in South Korea, bustling with crypto enthusiasts and young artists eager to find new sales outlets for their works.

It is now worth more than 1.4 billion won since the virtual currency rose in value.

Ethereum is the second-most valuable cryptocurrency after Bitcoin.

“I thought it was important to be a first mover. By the time when everyone else is doing it, it would already be too late,” Kim said in a recent interview.

Selling her first NFT felt adventurous and refreshing, she said, as she was looking for “a new value” in her work, as well as “a new market.”

“I didn’t expect to receive such huge interest,” she said of the auction result. “I was blown away.”

Still many people must be scratching their heads, wondering what all the fuss is about.

NFTs are digital assets that have identifying information and are permanently traceable through a network of computers.

They provide the digital art world, which, by nature, is prone to endless duplication, with much-needed provenance and proof of authenticity. Plus, there is a feature that enables creators to receive a royalty whenever the NFT changes hands.

“There is really nothing negative about NFTs,” a South Korean artist, who goes by the name Mr. Misang, meaning Mr. Unknown in Korean, said in a phone interview.

Mr. Misang is currently the second-highest grossing artist of all time on the global NFT trading platform of SuperRare. The cumulative transactional amount of his “Modern Life is Rubbish” series totaled US$1.76 million as of May 13, according to the service.

Unlike OpenSea, also an NFT platform where anyone can upload their works, SuperRare provides a curatorial service of selected artists based on an internal screening process.

His achievements are astonishing given that he learned about NFTs only early this year, when an Instagram user, whom he had not known, tagged him on the user’s Instagram’s Story, saying Mr. Misang would definitely become hot if only he joined the crypto art scene.

Intrigued, he started to dig in. It did not take long before he concluded that it seemed “worth diving in,” he said.

He worked on his years-old 2-D “Modern Life” series and turned it into 3-D animated works to make it more appealing as crypto artworks.

The series revolves around two characters, Franken AJE and Mr. Misang, and modern society surrounding them in a psychedelic style.

Having a stable sales channel for his works allowed him to stop taking contract illustration works and to focus solely on the works that he enjoys doing, he said.

“The best thing about NFTs is that I can now sell my work. Previously, there was not much of a market for it,” he said.

The screenshot captured on May 12, 2021, shows artist Yoon Da-in’s “More Than Meets The Eye” from the NFT platform of OpenSea. She has not started to sell her artwork but is positively reviewing the NFT market. (Yonhap)

According to Nonfungible.com, the largest database of blockchain gaming and crypto collectible markets, the NFT market has grown with breathtaking speed in recent years, with its market capitalization surpassing $338 million worldwide last year, eight times bigger than $40 million in 2018.

Anything digital, from illustrations, music and drawings to even a tweet or newspaper column, can sell as an NFT. Twitter CEO Jack Dorsey’s first-ever tweet from 2006 sold for $2.9 million in March.

In Korea, an NFT news report on the controversial comments by Eun Sung-soo, one of the country’s top financial officials, was posted on OpenSea last month by the Seoul-based blockchain content company, Block Media.

It was an apparent rebellion against Eun, chairman of the Financial Services Commission (FSC), who warned against high risks of volatile cryptocurrencies, by saying it was “the duty of elders” like himself “to correct the young people” who walk “on the wrong path” and spend money in digital currencies that have no “intrinsic value.”

By using blockchain technology, the fashion industry can build a copyright protection system, like that of the music market, she said.

A graduate of the Fashion Institute of Technology in New York, she recently held an exhibition in Seoul, displaying the 3-D renderings of her “Baroque: The New Normal” collection. Five pieces of her works are now offered on OpenSea.

Premier global auction houses like Christie’s, Sotheby’s and Phillips all have recently moved to embrace this potentially explosive market.

“We are expecting a new market to be born, with digital assets taking off,” an official from Seoul Auction Blue, a subsidiary of Seoul Auction, who has close knowledge of the company’s plan to venture into the NFT market, said.

The company earlier announced it plans to start an NFT auction in the third quarter. 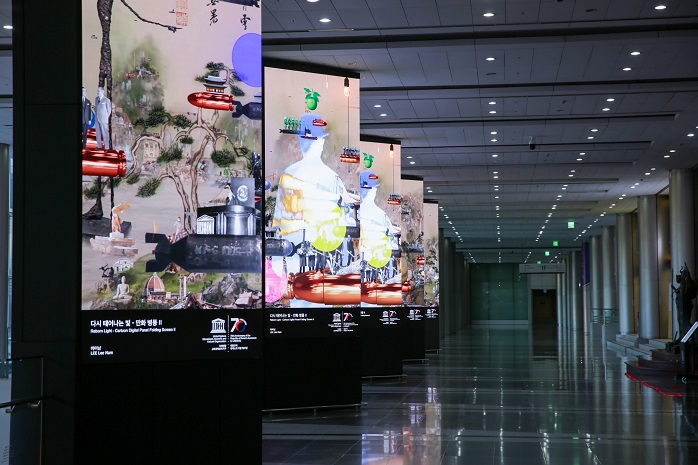 Media artist Lee Lee-nam’s artworks are on display at the COEX Convention & Exhibition Center in Seoul on Oct. 7, 2020, in this photo provided by the Korean National Commission for UNESCO.

The NFT market will “lower entry barriers to the art scene and encourage more creators to join the market, leading to greater diversity,” the official said.

The NFT fad did not spare celebrated media artist Lee Lee-nam, who has been receiving a flurry of calls from gallerists and investors about possible partnerships.

Lee said the latest craze for NFT art left him bewildered and even scared.

“But I think I need to know what is going on,” he said, adding, “This could be the way going forward.”

Globally well-known artist Yoon Da-in, who uses her face and body as a canvas to create optical illusion art, said she was carefully — and positively — reviewing the market.

She said NFTs can offer “important opportunities for me and collectors as my paintings, which only exist for a fleeting moment in time, can now achieve a unique digital status and live on forever in collections worldwide.”

“I was awarded Adweek’s ‘Technology Creator of the Year’ last week, which came in the form of an NFT, actually,” she said.