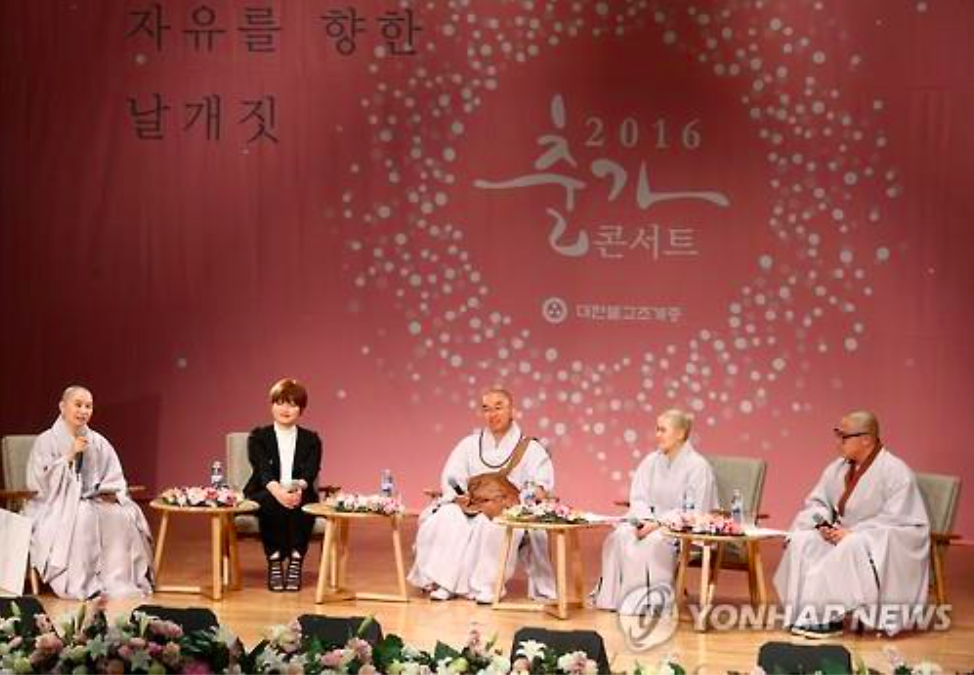 The concert, titled ‘Youth, the Flight towards Liberty’, was held for the purpose of providing answers and advice to young adults interested in entering Buddhist priesthood. (Image Courtesy of Yonhap)

SEOUL, May 27 (Korea Bizwire) – “Even though I am young, I will never regret my choice to enter the Buddhist monk life! I focus on my own path, I make my own way, and I am going to keep charging ahead!” A rap chanted out to a strong beat box filled the hall of Dongguk University’s Seoul Campus on the afternoon of May 26.

The performance, which might have seemed like a typical college student talent show amidst the current university festival season, was in fact the opening number for the “Entrance into Buddhist Priesthood Concert” hosted by the Jogye Order of Korean Buddhism, performed by Buddhist monks-to-be in their early 20s. 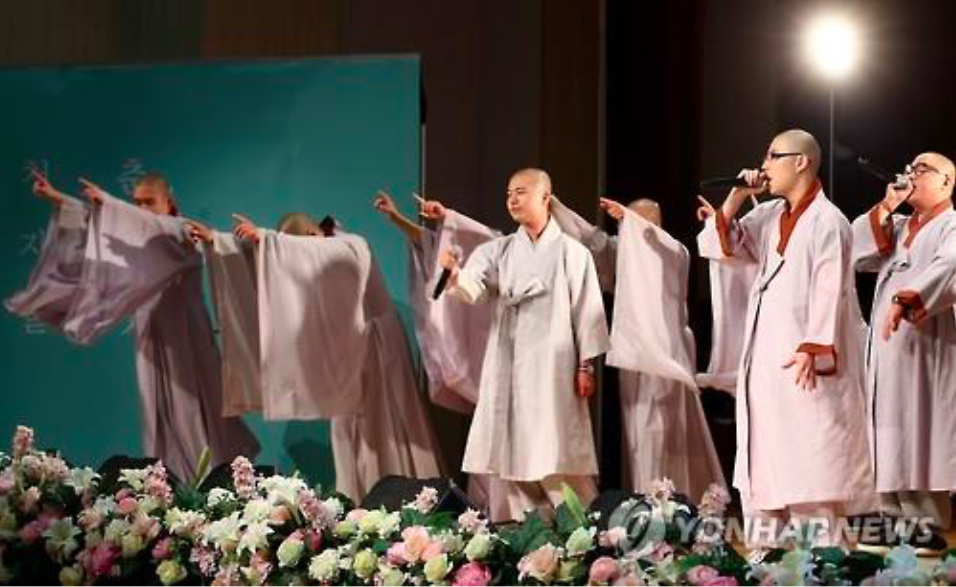 The performance was the opening number for the “Entrance into Buddhist Priesthood Concert” hosted by the Jogye Order of Korean Buddhism, performed by Buddhist monks-to-be in their early 20s. (Image Courtesy of Yonhap)

The concert, titled ‘Youth, the Flight towards Liberty’, was held for the purpose of providing answers and advice to young adults interested in entering Buddhist priesthood. The panel at the concert included various prominent Buddhist monks and even non-monks such as ‘Mind Design’ representative Minji Kim, who had undergone short-term Buddhist priesthood. Regardless of their backgrounds, the universal recommendation from panel members was to enter Buddhist monkhood life.

When asked, “Would you choose the path of a Buddhist monk even in your next life?”, one of monks replied, “Although in this life I entered Buddhist priesthood by the recommendation of my father, in my next life I myself would choose to enter Buddhist priesthood,” garnering applause from the audience.

The panel members shared the variety of unexpected beginnings to their monkhood, encouraging the audience to not view entrance into Buddhist priesthood as such a foreign and formidable endeavor.

“I had a girlfriend around the time I decided to enter Buddhist priesthood,” said one of the monks. “When I told her of my decision, she exclaimed, ‘You? You entered Buddhist priesthood?’ and had a really hard time believing in me,” added the monk, causing laughter from the audience. 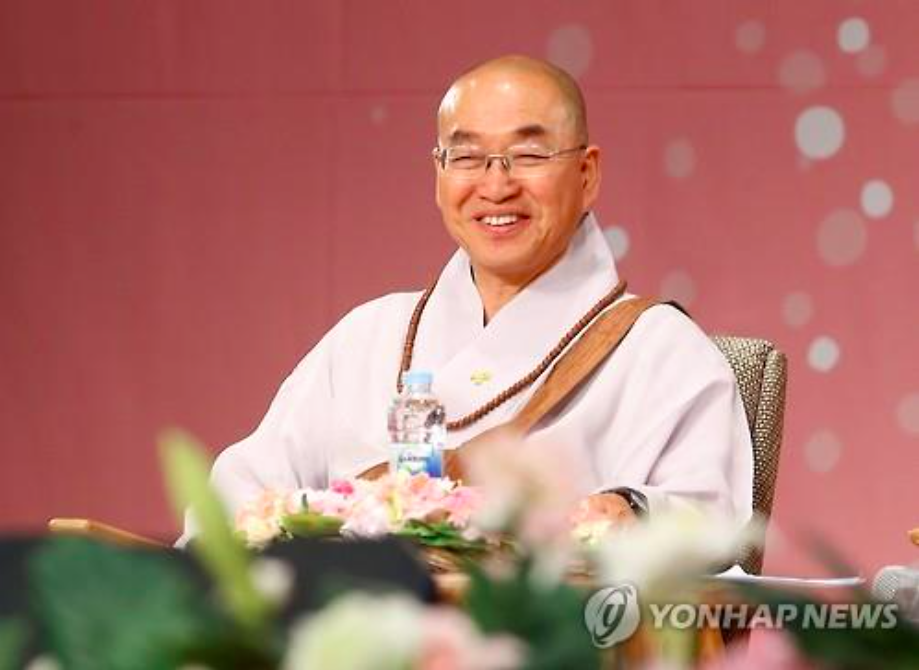 The panel members shared the variety of unexpected beginnings to their monkhood, encouraging the audience to not view entrance into Buddhist priesthood as such a foreign and formidable endeavor. (Image Courtesy of Yonhap)

Likewise, a Dharma chakra monk, reportedly known among fellow monks as their ‘Pillar of Mental Strength’, explained, “I was a church attendee during elementary school years. I started going to Buddhist temples at the suggestion of a middle school friend, and then I entered Buddhist priesthood when I was 17 years old. But to be honest, at the time I did not even want to!”

The panel members also thoughtfully informed the audience of the alternative ways to experience Buddhist priesthood aside from actually committing to live at a monastery for the rest of their lives.

Representative Kim from ‘Mind Design’, for instance, underwent a short-term temporary Buddhist monkhood instead, and recommended that the attendees experience it even for a short period of time.

“I entered the short-term Buddhist monastery life when I was having suicidal urges, due to growing up in a broken family, and seeing my father’s business decline,” she described. “My experience became the turning point of my life. Since then, I have been living my life with a sense of having looked at the answer sheet for how to live life. Life is still difficult, but now I feel that I am truly living my own life, and that I am heading towards the life that I truly want,” added Kim. 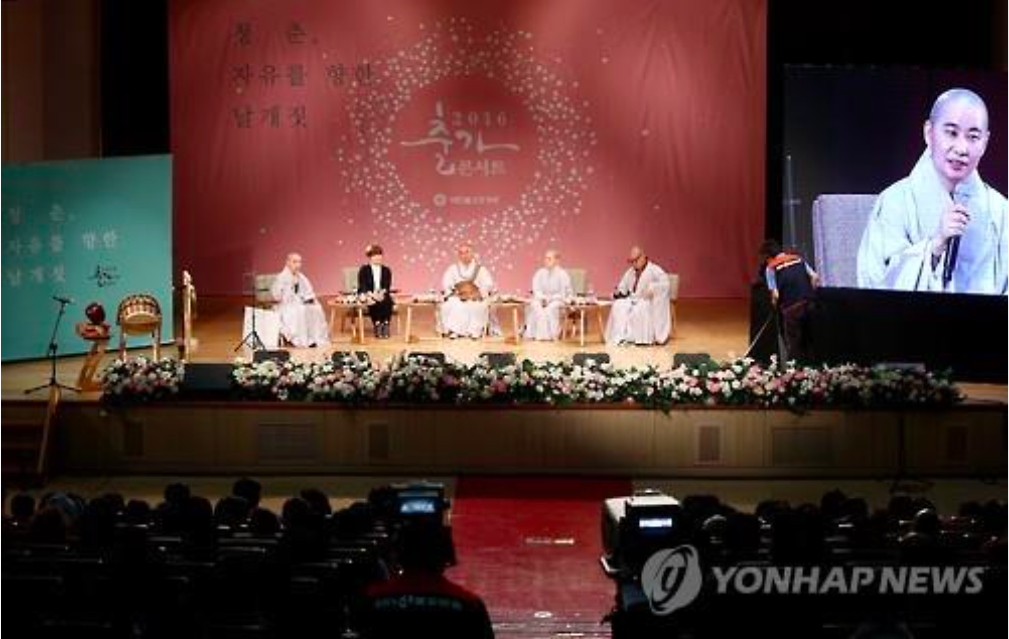 Representative Kim from ‘Mind Design’, for instance, underwent a short-term temporary Buddhist monkhood instead, and recommended that the attendees experience it even for a short period of time. (Image Courtesy of Yonhap)

A panel member, the Dharma chakra, stretched the definition of ‘Buddhist monk’ even further, explaining that you can live the Buddhist monk lifestyle even at home.

“But for someone like me who cannot cut out the obsessions on his own, I recommend entering the Buddhist monkhood and seclusion,” added the monk.

As to exactly how a person can enter Buddhist priesthood, the Dharma chakra monk cheerfully gave an easy applicable solution while still pinpointing the need for responsibility over one’s self.

“If you are over 20 years old, you can decide for yourself!” the monk exclaimed. “You are an adult now, so your decision for your life is your own even while considering the advice of your parents,” he continued. He finished by emphasizing, “If you cannot decide your own life and are simply pulled along by others, you are existing as a slave who is unable to live his own life.”

Despite the benefits of entering Buddhist priesthood, however, the monks also warned of the difficulties involved by giving accounts of their personal hardships.

A common hurdle was disapproval from their parents. “My parents relentlessly opposed my decision to enter Buddhist priesthood,” said a monk. Other roadblocks included others’ prejudice and opinions against entering Buddhist priesthood.

Nevertheless, the monks continued on to explain that the absolute joy one finds upon entering Buddhist priesthood invalidates all the worries that may lead up to it.

“The purpose of the entire Buddhist monkhood is to reach nirvana, at which point you will experience a lasting, continual happiness by liberating yourself from your desires,” a monk explained. The ironic aspect of Buddhist monkhood lifestyle is that one gains an unending happiness, the pinnacle state called nirvana, by the very act of ceasing one’s desire for gain.

The Buddhist Jogye order plans to hold a Buddhist priesthood concert in Busan as well in order to raise the general public’s awareness about becoming a Buddhist monk.