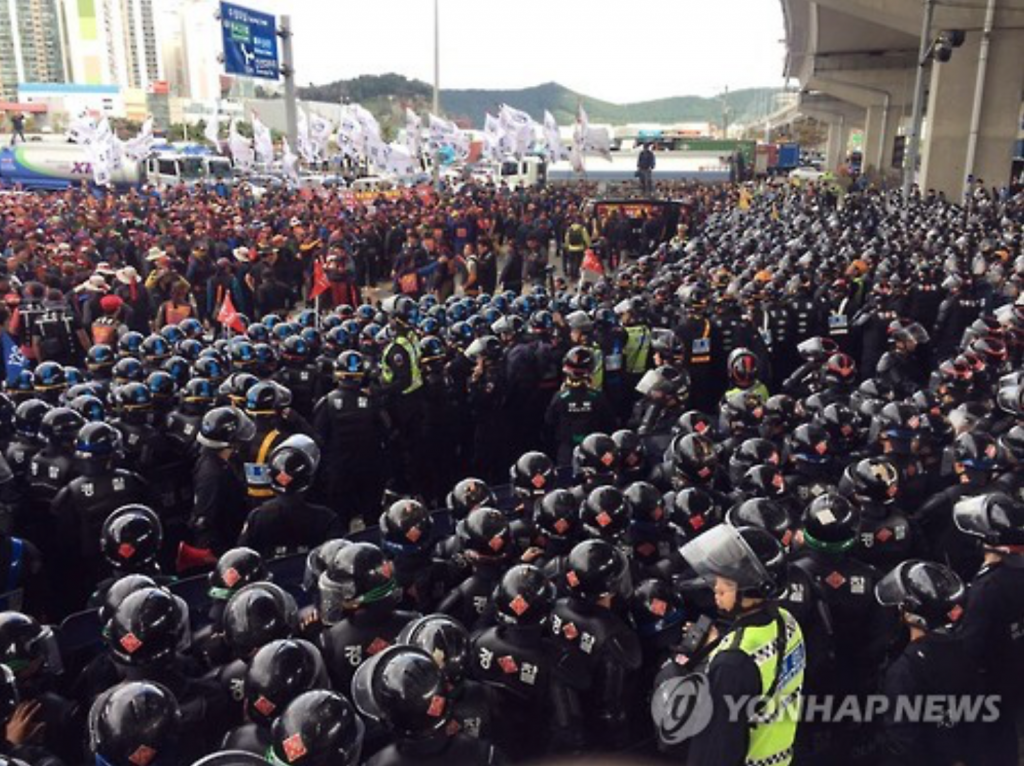 Riot police confront unionized truckers at a port in Busan on Oct. 10, blocking them from marching onto the streets for a protest rally. (image: Yonhap)

BUSAN, Oct. 11 (Korea Bizwire) – The Port of Busan is facing more strife with a recent walkout by cargo truck drivers, making matters worse for the port already troubled by the Hanjin shipping crisis.

The Cargo Truckers Solidarity (CTS) kicked off a general strike on Monday, with workers opposing government plans to increase the number of smaller-sized trucks to expand home delivery services in Korea. The strike has led to a halt of more than a third of container trucks operating from the nation’s largest port.

According to the Busan Regional Oceans & Fisheries Administration (BROFA), 860 of 2,200 container trucks transporting cargo from the port are subject to the strike.

The biggest setback is the inter-terminal transport of transit shipment cargo, which is often moved from the Busan New Port to the North Harbor, accounting for a daily average of 800 containers.

The port terminals in the city are already becoming crowded following the Hanjin crisis. The storage rate for the terminals, which usually stands at about 50 percent, has increased to around 60 percent, while the rates specifically for Hanjin terminal (Busan New Port) and Pier Gamman (North Harbor) have reached 80 percent and 83 percent, respectively.

The rates for other terminals will also reach the 80-percent mark with the addition of 50,000 containers, officials say, which is usually the limit for optimal port operation.

To help ease the situation, the BROFA has decided to allow the temporary operation of yard trailers, which only operate inside port terminals, to move empty containers to outside storage blocks. In addition, 55 military transport vehicles have also been provided to help with inter-terminal shipments and other container transportation.

No significant setbacks have resulted yet from the latest strike, but a prolonged walkout by the CTS with more truckers jumping on the bandwagon could lead to a series of problems, including the delayed departure of cargo vessels, according to BROFA.

“We’re in a state of crisis with the troubled Hanjin Shipping on top of CTS refusing freight transport,” said a BROFA official. “Luckily, we are not facing severe damages from the situation, but we certainly hope it doesn’t persist to the point where things become irreparable.”

Monday’s strike came amid an ongoing walkout by railroad workers, which has already crippled Korea’s shipping network, also making it difficult to make use of railroad transport as an alternative. As of Monday afternoon, less than 50 percent of freight trains were operating.