The history of Gyeongju (located in the southeast of Korea) dates back to ancient times when the city was the capital of the Silla Dynasty (BC 57-935), the longest period of reign in the history of Korea.

SEOUL, Korea, Oct 07 (Korea Bizwire) – The City of Gyeongju invites you to this ancient land with lots of natural beauties in October. Gyeongju is not just famous as the Shilla capital with Bulguk Temple and the Seokguram Grotto. It has so many places to visit for hikers and motorists.

The Mujang Peak in Mt. Dong-Daebong is already well known by hardcore hikers for its vast silver grass communities covering wide patches along the trail. This is also an ideal place for photographers for that Kodak moment. The city government will run free shuttle buses to the entrance to the Mujang Peak from major tourist spots within the city from October 5 for fall foliage tourists.

The Ginkgo Road on the way to Tongil Shrine in Gyeongju’s Mt. Nam is another place you can’t miss. It is said that this road full of ginkgo trees with yellow fallen leaves will make old couples walking along it feel romantic again.

Yongdam Pavilion, located in Mt. Gumi, is considered a sacred place to Cheondoism as its founder Choe Je-u was born here and later buried nearby. This is also a nice place to walk and take pictures, as well as to reflect on Korea’s modern history.

Anyone who prefers driving than walking may want to take the road to Mt. Toham along Gyenggam Road. This trail is made famous by Kings Munmu and Shinmun who were instrumental in unifying the Korean peninsula in the late 7th century. 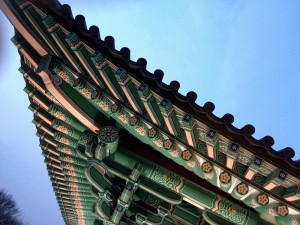 Since the ancient relics are such an integral part of the area, the whole city has been designated as a UNESCO World Cultural Heritage under the name ‘Gyeongju Historic Areas’.(image: renaissancechambara at flickr)

If you are a history buff, you can’t skip the Shilla Culture Festival, the event held every October in Gyeongju. To be open for three days between October 11 and 13 in Hwangseong Park and several other locations within the city, the fiesta features Shilla artwork displays, Buddhist prayer ceremony at Bulguk Temple, folk wrestling competition, sword fight performance, and many others.

In addition, you can participate in a fete featuring the Emille Bell, or the Bell of King Seongdeok, a massive bronze bell cast in the late 8th century. The event will be held for four days between October 3 and 6 at the main lawn of Cheomseong-dae, an astronomical observatory in Gyeongju. During the event period, the whole area will be lighted with Shilla-style lanterns from 6 pm to 11 pm.