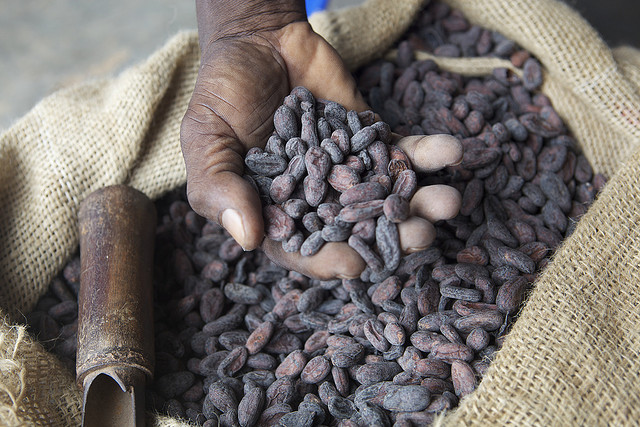 The two West African countries account for 60 percent of cocoa production in the world.(image:Nestlé/flickr)

SEOUL, Oct. 23 (Korea Bizwire) – The world’s chocolate makers are desperately trying to contain cost overruns as the cocoa prices skyrocket due to border closings of Cote d’Ivoire and Ghana with Ebola-afflicted Liberia, Sierra Leone and Guinea. The two West African countries account for 60 percent of cocoa production in the world.

According to industry sources on October 22, the international cocoa price hit US$3,221 per ton this month, a record-high level in three years, up 18 percent from the previous month and 23 percent from last year. An official with a specialty coffee franchiser said, “Right now is the cocoa harvest season but most chocolate makers are having difficulty procuring cocoa supplies. Without the output from Africa, it will be way insufficient to satisfy the global demand.”

Indeed, major chocolate purveyors such as Hershey of the United States and Nestle of Switzerland are deeply worried about a possibility of cocoa supply shortage. As the two companies own large-scale cocoa farms in Cote d’Ivoire, they expect to see an output reduction of 600,000 tons this year if the current Ebola outbreak spreads across the border to Cote d’Ivoire.

An official with the International Cocoa Organization said, “Following a $100 million donation of Nestle to the International Committee of the Red Cross, other major chocolate companies like Godiva Chocolatier, Ghirardelli, and Mars Inc. are making donations to help with keeping Ebola virus from spreading further. A domestic chocolate company official commented, “If the Ebola epidemic continues for months to come, cocoa prices may rise further up, affecting domestic chocolate prices as well.”