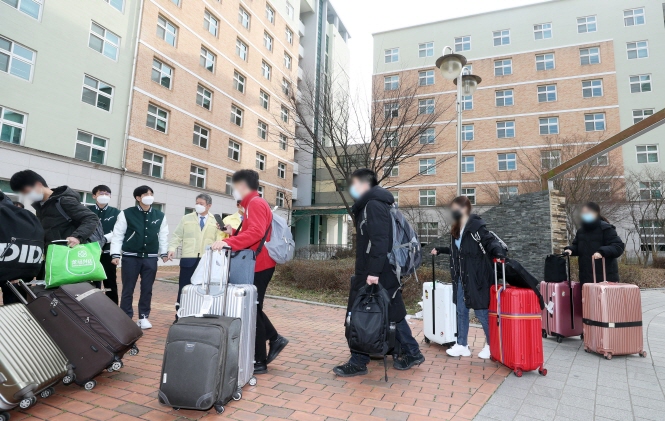 Chinese students returning from their winter vacations in their home country arrive at Chungbuk National University in Cheongju, North Chungcheong Province on Feb. 24, 2020, to enter a designated dormitory building where they will be isolated for 14 days. (Yonhap)

SEOUL, Feb. 25 (Korea Bizwire) — Chinese students enrolled in South Korean universities are returning in growing numbers this week after their winter break in China ahead of the start of the spring semester, putting local health authorities and school officials on the highest alert to halt the spread of the coronavirus outbreak.

Most local universities have already mapped out plans to isolate their Chinese students in separate dormitory buildings for about two weeks, the known incubation period of COVID-19, and closely monitor their health conditions and movements.

According to the Ministry of Education, approximately 19,000 Chinese students are expected to come back to South Korea between this week and the end of March.

The ministry’s recent survey found that about 38,000 of some 70,000 Chinese students enrolled nationwide were staying outside South Korea as of last week.

Half of those staying abroad expressed an intention to return by end-March, with the other half having yet to fix their return date.

The ministry recently advised Chinese students who have not booked their return tickets to take the semester off, while local universities may delay the new school year by up to four weeks at the recommendation of the government.

Ministry officials say the actual number of those returning to the country may fall short of the estimate, amid growing Chinese concern about a huge rise in infections among South Koreans.

Domestic universities are still taking extra precautions to ensure that their Chinese students avoid contact with other students on and around campus.

Most of the Chinese students arriving at Incheon International Airport, west of Seoul, are being greeted by school officials armed with gowns, masks, gloves, goggles and other protective equipment before being ushered onto disinfected buses heading for school dorms.

Chinese students who don’t enter a dormitory are asked to quarantine themselves in their own residence and are prohibited from visiting campus for 14 days.

Seoul’s Kyunghee University, which has 3,839 enrolled Chinese students, the largest among domestic universities, began to receive returnees from China this week, ahead of the start of the spring semester slated for March 16.

The university transports its Chinese students by a disinfected bus from the Incheon airport to its main campus in eastern Seoul after having them undergo a brief medical checkup, including temperature measurement, at the airport clinic.

Before entering a designated dormitory, the Chinese students are additionally required to have their body temperatures measured and are asked questions about their health conditions.

They will be provided with one dormitory room with a private bathroom, as well as meals and daily necessities, for two weeks.

“Some Chinese students have canceled their flights to Seoul or delayed their departure dates after the number of coronavirus cases surged in Korea from last week,” said an official at Kyunghee University.

“The number of Chinese students returning from China could be smaller than expected.” 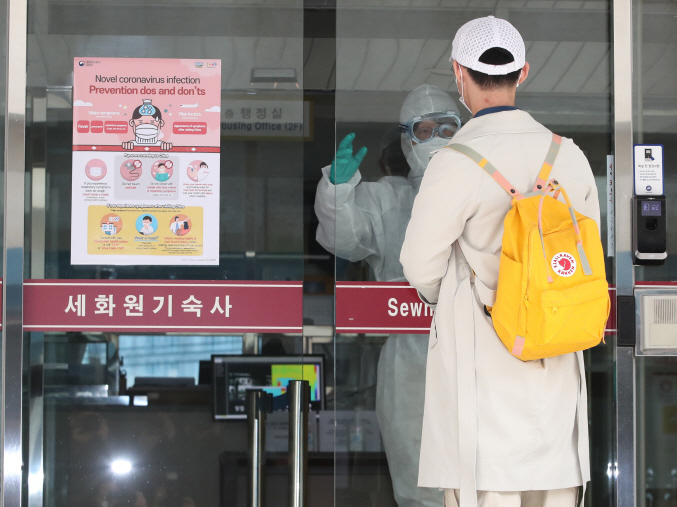 A Chinese student listens to a quarantine official before entering a dormitory building of Kyunghee University in eastern Seoul on Feb. 24, 2020. (Yonhap)

Universities in provincial cities have taken similar quarantine measures for their Chinese students.

The school offered face masks, hand sanitizer and thermometers to the Chinese students who will be isolated in separate rooms for 14 days.

They should check their body temperatures twice a day and record it on the checklist attached to the front door.

As some universities may not have enough space at their dormitories to quarantine all students from China, municipalities of Seoul and other cities have offered to provide temporary accommodations for them.

In Seoul, the government and schools plan to monitor students’ health twice a day and run a mobile app where students will be able to report their health conditions.