SEOUL, April 22 (Korea Bizwire) — Unionized construction workers on Thursday demanded the removal of a billboard suggesting their wives will sleep with other men if they do not stay safe at work.

The billboard, which has been installed at the construction sites of major builders since 2017, shows a woman and man in bed, along with the words, “If you get into an accident, another man will be lying next to your wife and using your compensation money.”

The ad was apparently designed to encourage construction workers to follow safety precautions on site, but its graphic nature has left many offended and angry.

“What’s behind this is a vulgar perception of labor held by construction firms, their tasteless perception of women and their shameless views on safety,” the national construction workers’ labor union said in a statement. “We don’t ever want to see it again.” 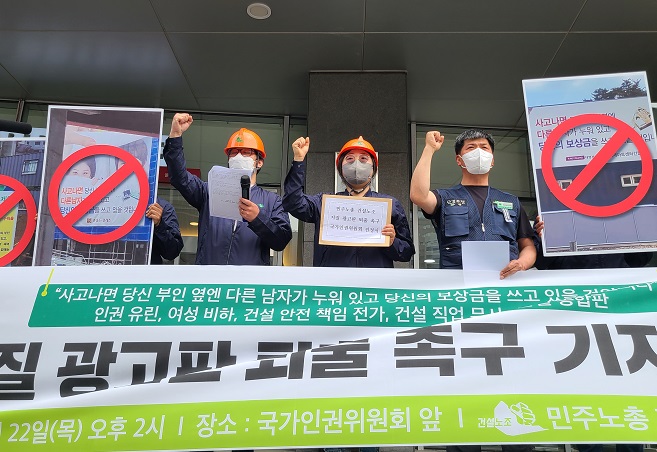 Unionized construction workers denounce a billboard they say is offensive to laborers during a press conference outside the headquarters of the National Human Rights Commission in Seoul on April 22, 2021. (Yonhap)

The union filed a petition with the National Human Rights Commission, asking the watchdog to recommend corrective measures to the Construction Association of Korea, whose members include major builders.

“A safety billboard is meant to alert workers to issues of safety, but (the billboard in question) has nothing to do with safety and shifts (responsibility for) accidents to the worker,” Lee Min-cheol, a union member, said at a press conference outside the commission’s headquarters.

“A billboard that looks down on the human rights of workers and their families should never be put up,” he said.

According to the union, a survey of 783 members in their 20s and 30s found that 45.1 percent of them felt that the ad looked down on construction workers, while 8.4 percent felt humiliated and 4.7 percent viewed it as sexist.