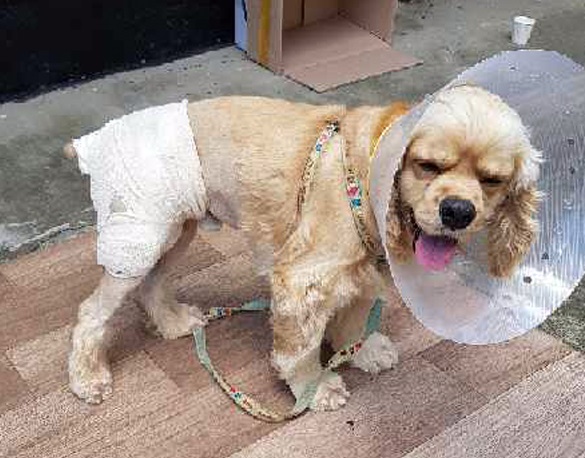 BUSAN, Aug. 16 (Korea Bizwire) — In response to an outpouring of public support for “Taeyangi,” a dog that was deeply hurt after engaging in a bloody battle with a wild boar that attacked hikers near Sorim Temple, which is situated in mountainous terrain near Busan, the dog’s owner politely refused to accept cash donations to help cover Taeyangi’s medical bills.

Kim, a 63-year-old resident of Busan, said that it was painful to see her pet Taeyangi hurt. “Taeyangi is currently undergoing treatment,” she said.

However, Kim went on to refute rumors that she did not have the money to treat Taeyangi.

As for the flurry of calls by people who were willing to help offset Taeyangi’s medical bills, Kim said she was “thankful for the offers to help” but wanted to pay for the treatment herself as the owner of Taeyangi, a cocker spaniel that she adopted a year ago.

Taeyangi is said to be very popular at the temple, where Kim is a regular.

In response to public criticism that Kim released Taeyangi’s leash in order to protect the people on site, Kim said “she was scared to see three wild boars attaching hikers” in front of her eyes.

“I wanted to scare away the boars with a stick along with Taeyangi but it wasn’t enough,” said Kim.

Kim said that she and the hikers were saved when “Taeyangi risked his life to attack the boars,” but said she was sorry that her dog had been badly hurt.

Taeyangi fought head to head with boars that charged inside the temple quarters on August 9 at Mt. Geumjeong in Busan.