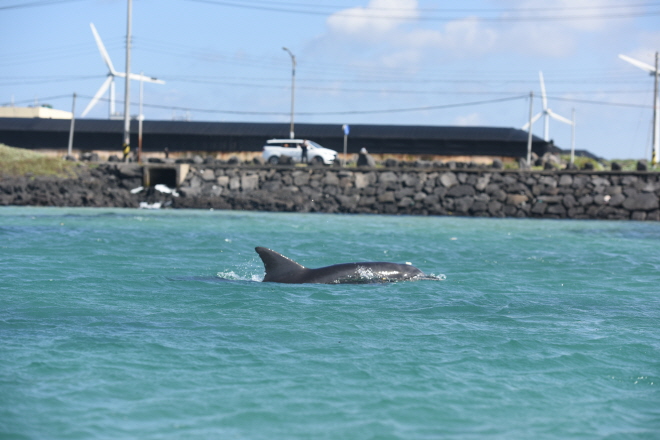 JEJU, Sept. 6 (Korea Bizwire) — An Indo-Pacific bottlenose dolphin (scientific name: Tursiops aduncus) has been travelling freely into a fish farm situated in the waters of Haengwon-ri off the coast of Jeju Island in search of food, experts say, with its most recent visit documented yesterday.

The dolphin that swam into a traditional Jeju fishery known as “wondam” was in pursuit of the abundance of fish found in the area.

Wondam refers to an enclosed fishing ground connected to the sea that makes use of the ebb and flow of the tide to capture fish within its stone walls.

Professor Kim Byeong-yeop of Jeju National University said that this particular dolphin would stay within the fishery for over a month during each visit to feed on the fish.

According to Kim, this is the sixth documented instance in which the dolphin ventured into the wondam since 2016. Because of the dolphin’s habitual visits, Kim’s research team has given the dolphin the nickname “Wondam.”

The researchers hypothesize that the dolphin has been visiting the fishery because it knows that mullets and other fish get trapped within the walls, offering an abundant source of food.

Once the food supply grows scarce within the stone walls, “Wondam” leaves during the rising tide when the water is high.

Kim Hyeon-wu, a researcher at the National Institute of Fisheries Science’s Cetacean Research Center, states that “Wondam” is a male dolphin at least 20 years old, which is middle-aged by human standards.

This would make “Wondam” a very experienced dolphin, probably having accumulated the knowledge of every nook and cranny of the local marine environment.