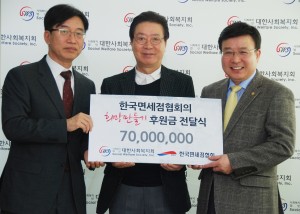 President Lee said in an interview, “it is always redeeming to ponder upon late Mother Theresa’s words about how there are more of us dying of lack of love than lack of food.” He also added that he hoped, “this little gift from the duty-free industry would be the proof of dreams, hopes and love for those children living in harsh environments.”

These donations do not seem to be the last ones by the Association according to President Lee who also expressed his ambitions to expand the good practice throughout the industry.

Korean duty free shops are currently returning about 3 billion KRW of their profits to society and the number is increasing each year. In addition, the industry is preparing scholarship funds for teenage students and children in order to reach out to more. And the amount of the scholarship funds is expected to increase next year when the Association will be celebrating its 10th anniversary.