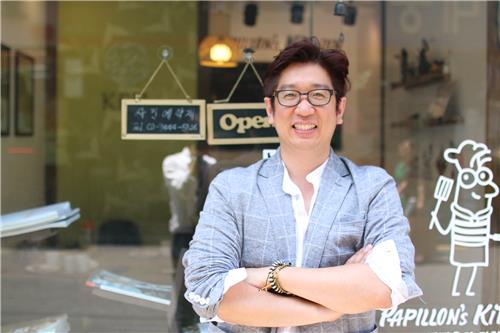 Kim Young-wook, head of the Korean Edible Insect Laboratory, poses in front of his restaurant in Seoul. (image: Yonhap)

SEOUL, Jun. 7 (Korea Bizwire) — For most modern-day people, eating creepy bugs would be the last option before starvation. With a deep sense of disgust, many call it “uncivilized” behavior, despite the potential of insects as a viable food source.

But Kim Young-wook, a food researcher and marketing expert, has been striving to change such a negative public perception towards insects and is pushing to turn them into part of a nutritious, tasty and environmentally friendly diet.

His years-long efforts culminated last year in the opening of Papillon’s Kitchen, South Korea’s first insect restaurant in Seoul that boasts a varied assortment of foods ranging from cookies to sandwiches and seafood tomato pastas.

“The biggest challenge, above all, has been the ‘disgusting factor’ that is deeply lodged in people’s psyche. They don’t even try it if any food looks unpalatable at first glance,” Kim, head of the Korean Edible Insect Laboratory, told Yonhap News Agency.

“But once you make it look good and explain the nutritional value of insects to them, people would think differently — one reason why we have focused our attention on developing food processing technology,” he added.’

Kim opened his restaurant less than a year ago. It is named after the 1973 U.S. movie “Papillon” that revolves around a remote French prison in which an inmate in solitary confinement eats cockroaches and centipedes to survive.

The one-table restaurant is like a laboratory where Kim and his employees — mostly his pupils — have racked their brains to find ways to appeal to a wider and more diverse population, and carve out a niche in the food market here.

To help squelch the sense of repugnance towards insects, Kim has been promoting his food products as “low-carbon, high-protein” ones, rather than explicitly mentioning their ingredients such as mealworms, silkworms, crickets and other insects.

His restaurant has mostly used mealworm powder and oil to make pasta, deep-fried rice balls, soup, macaroons, ice cream and various sauces so that they look palatable to a wider range of customers.

Mealworms, the larval form of the darkling beetle, are already widely known as a protein-rich food source.’ 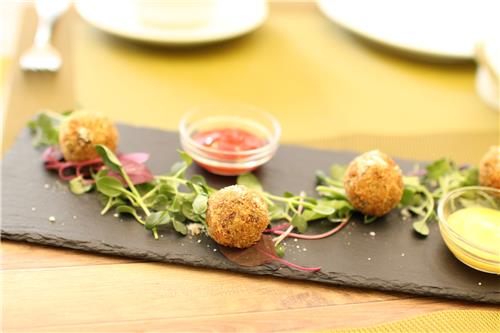 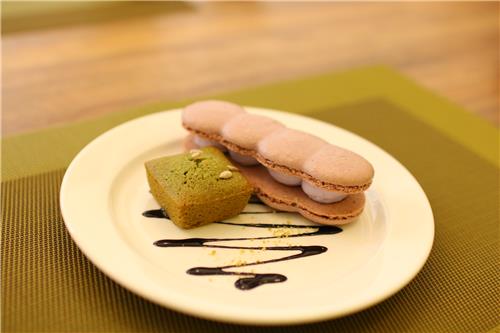 Desserts made of mealworm powder at Papillon’s Kitchen in Seoul. (image: Yonhap)

Kim’s efforts to appeal to bug-averse customers seem to be paying off.

Driven by his “insatiable” curiosity, Kim Seol, a 29-year-old office worker in Seoul, tried a pasta made with mealworms and found out that it was “no different” from an ordinary one. He said he would frequent the restaurant with his family and friends.

“In the beginning, I was overpowered by the uncontrollable sense of disgust, preoccupied with the thought of if I could get a sense of wriggly bugs while eating the pasta,” the customer said after finishing the main dish.

“But to my surprise, the sort of distaste faded towards the end of my meal. I can now recommend my family come here and try this new, unique set of dishes.”

Ramping up his marketing campaign beyond Korea, Kim has recently been tapping into the U.S. market. Last month, his company participated in Eating Insects Detroit as the South Korean representative, the first U.S. conference dedicated wholly to the topic of edible insects.

But deep-seated prejudice against insects still remains a daunting challenge to overcome said Lee Jun-yeop, part of the culinary staff at Kim’s restaurant.

“Many people are still flabbergasted when they happen to find that what they eat is made of insects,” he said. “Some immediately spit it out, though there are a few who want to try it purely out of curiosity.”

Unbowed by widespread prejudice, Kim is pinning hopes on the high nutritional value and eco-friendly nature of insect-based foods to further promote his products.

According to a 2013 report by the U.N. Food and Agriculture Organization (FAO), insects are a healthy food source with high fat, protein, vitamin, fiber and mineral content.

For instance, the composition of unsaturated omega-3 and six fatty acids in mealworms is comparable with that in fish — and higher than in cattle and pigs — and the protein, vitamin and mineral content of mealworms is similar to that of fish and meat, the report said.

The FAO report underscores that insects are reported to release much less greenhouse gases and ammonia than cattle or pigs, and that they require less land and water than cattle and other conventional livestock.

On top of this, insects require much less feed then other animals. On average, insects can convert 2 kilograms of feed into 1 kg of insect mass, whereas cattle require 8 kg of feed to produce 1 kg of body weight gain, according to the report.

Also cashing in on the potential of insects as a food source is Ryu Si-doo, CEO of Edible Inc., a food-tech startup in Seoul. His company runs a coffee shop featuring the “mealworm 500 shake,” a cold drink made of 500 mealworms, and a series of cookies and energy bars that are made with silkworms and grasshoppers.’ 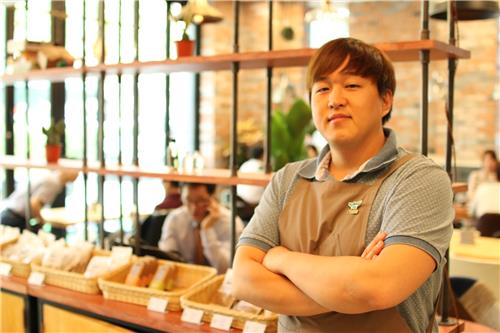 Ryu opened his company less than two years ago with the ambition to provide a “fresh and intriguing” experience to customers and help them change their prejudices against foods made of insects.

“I myself did not like insects per se. I hated rearing them … not to mention eating them,” Ryu said. “But after experiencing it so to speak or eating it, my perception towards insects changed and I thought that others could also change.”

Unlike Kim’s products, Ryu does not hide the fact that insects are in his cookies and other snacks, as those products revealing insect ingredients sell much better.

“There are various reasons why people buy insect cookies. They buy them because the cookies are interesting or just out of curiosity,” he said. “If insects are not revealed, they are no different from ordinary food products, meaning their enticing features would disappear.”

For Ryu, running this coffee shop is like treading an untrodden path. His adventure has yet to reach the break-even point, but he takes great pride in the fact that he has been blazing a trail in the emerging food industry.

“I have been constantly experimenting and developing new foods and new drinks to which my customers have shown interesting responses,” he said. “The fact that I am doing something new ahead of others makes me feel satisfied and proud.”

The South Korean market for insects has grown drastically over the past years, underscoring that it could emerge as a promising future industry.

In a report released earlier this year, the Korea Rural Economic Institute (KREI) estimated the size of the market at 313.9 billion won (US$264 million) last year, up 90 percent from 168 billion won in 2011. The government seeks to increase the size to 500 billion won by 2020.