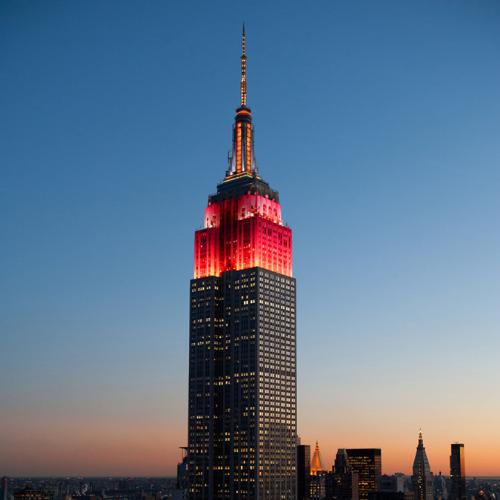 To kick-off the festivities, Ambassador Sun Guoxiang, Consul General of the People’s Republic of China in New York, will preside over a lighting ceremony on Wednesday, January 29, 2014, at 10 a.m. The lights will shine in dynamic red-and-gold bursts to simulate traditional Chinese Lunar New Year fireworks from Thursday, January 30 through Friday, January 31, 2014.

The Empire State Building will also commemorate the Year of the Horse with a festive window exhibition opening on January 29, 2014, in the building’s Fifth Avenue lobby. Renowned Chinese artist/singer GUO Feng has custom-designed one of the windows, and will speak about his vision and display during the lighting ceremony. The additional windows, which were designed by an array of young artists from Beijing, will feature a kaleidoscope of images and artwork illustrating a poem written nearly 1,000 years ago about the holiday. The exquisite windows echo the timeless joy of the season and symbolize a blessing from the people of China to the people of New York during the celebration.

In China, the horse signifies pioneering and galloping. It is believed to have the power of bringing good luck and new adventures to people’s lives. The Chinese Lunar New Year, also known as the Spring Festival, is the biggest Chinese celebration of the year and festivities traditionally continue for at least 15 days.

2014 also marks the 35th anniversary of China-US diplomatic relations which were established on January 1, 1979.

On Thursday, January 30, and Friday, January 31, from 6 p.m. – 7 p.m. the Empire State Building in partnership with Verizon will light in the colors of the Seattle Seahawks and the Denver Broncos for its #WhosGonnaWin Super Bowl campaign. The Lunar New Year lights will resume at the conclusion of the hour and remain on the building until 2 a.m.