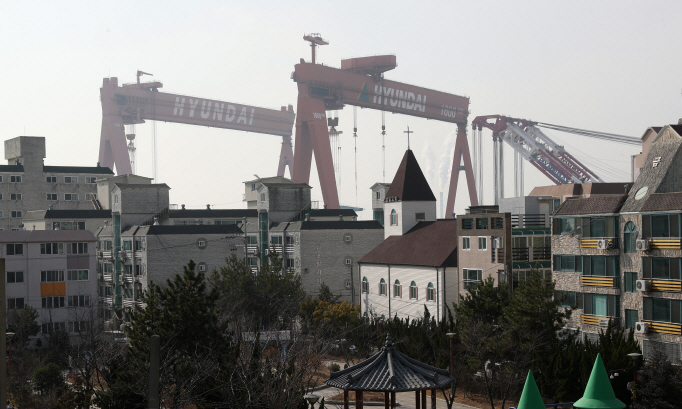 Ulsan’s Dong-gu district officials may not be receiving overtime fees and other benefits that were paid in the past. (image: Yonhap)

SEOUL, Oct. 12 (Korea Bizwire) — Due to the fall of the shipbuilding industry in Ulsan, tax collected in the city’s Dong-gu district has declined sharply, causing setbacks to various government projects.

In addition, government officials may not be receiving overtime fees and other benefits that were paid in the past.

According to the Dong-gu district office, a total of 13.4 billion won in residence taxes was collected on behalf of 48,799 employees working in the area last year.

The number of workers that paid local taxes fell by 30 percent from 65,900 people to 48,779 people during the same period. The district office collects 0.5 percent of a worker’s total salary in residence taxes.

This means that as the number of workers decreases, the total amount of tax collected in this category would be directly affected.

The decrease in taxes has been triggered by the decline of the shipbuilding industry in recent years.

In 2013, when Hyundai Heavy Industries Co. was at its peak, there were approximately 60,000 employees working at the company, a number that has since been halved.

And as the amount of taxes collected has been impacted negatively, the funds readily available have dropped by 44 percent from 2013.

The situation, however, is expected to get worse. Hyundai Heavy Industries decided to shut down its marine business plant in August due to a lack of contracts, leaving over 2,000 employees idle.

Internally, the municipality’s office had to deal with rising salaries among its contract workers and the expansion of free lunch meals for high school students.

The office of Dong-gu is expecting subsidies from the Ulsan government to increase, but this may not a viable solution as the slowed economy has brought in less taxes for the city government as well.

At this rate, the Dong-gu office says it will be difficult to schedule new projects, and those that are currently being planned may be forced to shut down.

The district office also expected that 30 percent of overtime fees and travel expenses may not be paid to local government employees.