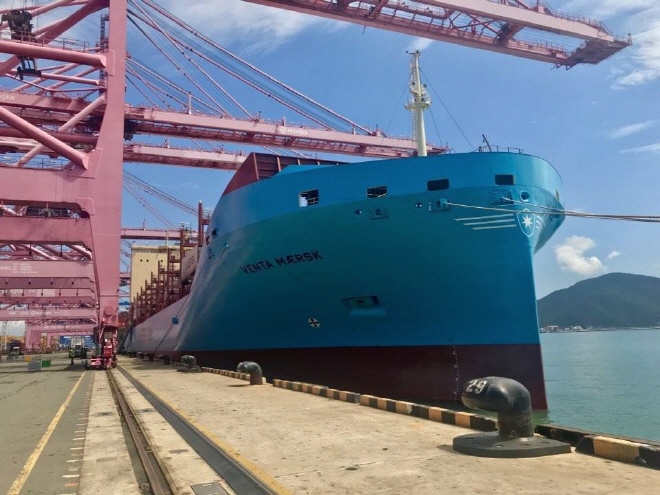 BUSAN, Aug. 29 (Korea Bizwire) — The “Venta Maersk,” setting out to be the first container ship to navigate a route that would pass the North Pole, is expected to leave Busan later today.

The vessel owned by Maersk, a Danish business conglomerate, has the capacity to load 2,600 containers, each measuring 20 feet.

The ship was initially scheduled to arrive at the Port of Busan on August 29, but was delayed due to the onset of typhoon Soulik.

After Busan, the “Venta Maersk” will be heading to the Port of Bremerhaven, one of the largest sea harbors in Germany, before sailing off for its final destination of St. Petersburg in Russia.

The “Venta Maersk” is expected to be the first container ship to voyage the Arctic route, but other types of vessels carrying oil or natural gas have already taken the path.

As the route is much shorter than going through the Suez Canal, the trip for the Venta will provide Maersk with logistical data that will help determine its long-term viability.

The Arctic route could potentially shave one to two weeks off the traditional Suez Canal route.

The route is not without its challenges, as it requires a specially-designed ice-resistant ship to travel the sea path littered with ice, which explains the stubby exterior of the vessel’s bow.

The Busan Port Authority expects that the route will result in various value-added business opportunities for the local port, supplying visiting ships with fuel and other necessities, once the path becomes commercialized.