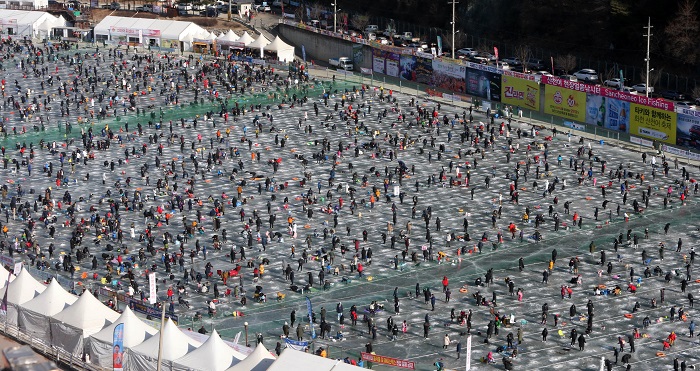 Foreign and domestic entities are eager to benchmark the festival. (image: Yonhap)

HWACHEON, Jan. 24 (Korea Bizwire) — With the 2019 Hwacheon Sancheoneo (mountain trout) Ice Festival continuing to attract a significant number of visitors every day, both domestic and international agencies are seeking to follow suit.

According to Hwacheon-gun in Gangwon Province, officials from the city of Norilsk in Russia will be visiting the festival between January 26 and 28 to observe how the festival has been organized.

Norilsk, along with Hwacheon-gun, is a member city of World Winter Cities Association of Mayors (WWCAM). The WWCAM conference has been held biennially since 2006.

Norilsk, renowned for its nickel production, has been looking into tourism as an alternative to the environmentally harmful nickel industry.

City officials visiting Hwacheon will be looking into weather conditions and other factors to decide if a similar festival could be organized in Norilsk.

Domestic entities across South Korea are also eager to benchmark the festival.

Officials from Hongcheon-gun came to the festival on Tuesday to observe the size of the festivities as well as the list of volunteers to take back to their own similar festival.

On Monday, representatives from the Organizing Committee for the Goseong World Dinosaur Exposition also visited the festival.

“We are providing support to other agencies to grow mutually,” said a source from Hwacheon-gun. “Behind the success of the festival lies the active participation of local residents.”