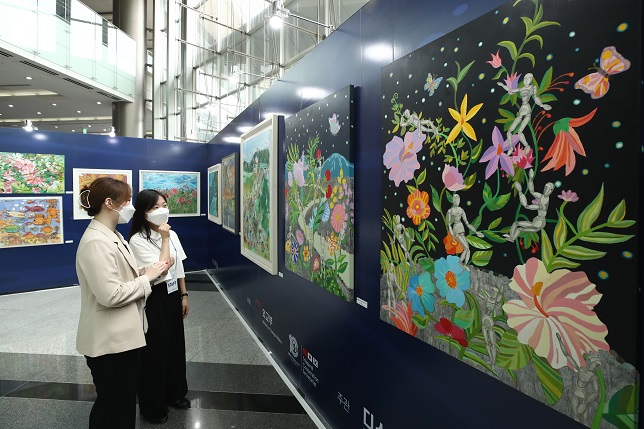 Visitors look at artworks on display during an exhibition by 13 artists of South Korea, China and Japan with developmental disorders at the COEX convention center in Seoul on July 8, 2021. (Yonhap)

The event, involving 13 artists, took place at COEX in southern Seoul under the theme of “Trilateral Cooperation Blooms through Art.”

It is co-hosted by the Trilateral Cooperation Secretariat (TCS) launched in 2011 to promote peace and co-prosperity among the countries.

The artists — four from South Korea, six from China and three from Japan — presented a total of 48 art pieces with some highlighting the beauty of nature, like the sunset on Korea’s resort island of Jeju, mountains in northern China and the coast of Fukuoka, southwestern Japan.

During the opening event, Deputy Foreign Minister for Political Affairs Yeo Seung-bae stressed that culture and art would serve as a conduit through which the people of the three countries can better understand one another.

“I hope that we will not forget that friendship and friendly sentiment among people of the three countries are the most basic and important elements of trilateral cooperation,” Yeo said.

“The foreign ministry will continuously support activities for exchanges and communication among the countries,” he added.

Participants included Chinese Ambassador to Seoul Xing Haiming and Hirohisa Soma, the deputy chief of mission at the Japanese Embassy in Seoul.

The exhibition came amid lingering concerns about cooperation among the countries, as Seoul and Tokyo are mired in protracted rows over wartime history and trade with Sino-U.S. geopolitical tensions dampening the prospects for regional cooperation.