“I have had a hard enough time so far. (after the Daewoo Group’s break-up and his being charged with many convictions in late 1990s). And I guess it’s about time to rectify what has gone wrong with general perceptions and evaluations of the Daewoo Group, which suffered unfair treatment when the Asian financial crisis folded out and still is under a false accusation.”

“I would think many assets of the Daewoo Group were sold at “dirt cheap” prices at that time, largely because I lost favor with high-level government officials who were in charge of the nation’s economic restructuring and hence the group’s break-up.”

Kim Woo-jung, 78, founder and former chairman of the Daewoo Group, at the 45th Daewoo Special Forum held in Seoul on August 26. 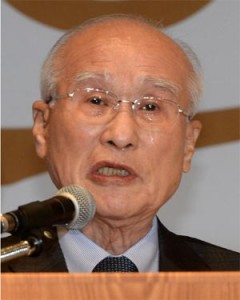 SEOUL, Aug. 28 (Korea Bizwire) – Kim Woo-jung, once a mighty chairman who commanded South Korea’s second largest conglomerate, the Daewoo Group, has finally spoken out about his standpoint surrounding what he claims an “unfair” break-up process of his founding group.

During his speech at a forum which has been arranged to celebrate a new book “A Dialogue with Kim Woo-jung” — a sequel to his bestselling book “Every Street Is Paved With Gold,” he complained of an injustice surrounding the conglomerate now defunct, even  close to tears in the middle of the address. According to a local report, the former businessman is mulling taking the issue to the Constitutional Court.

In the meantime, Sergio Rocha, president and CEO of GM Korea, which took over the auto brand of  Daewoo, strongly contradicted Kim’s argument that Daewoo Motor, its flagship company, was sold out at unfair prices to General Motors, due to the government’s misjudgment,  saying, “Primary responsibility a leader has to take on is to get a good grip on the reality. Based upon my four-decade sheer dedication to the automobile industry, I am striving to figure out what the best would be for GM Korea even at this very moment.”

CEO Sergio also made sarcastic remarks by saying, “I’m also planning to publish my autobiography after 14 years,” apparently entering the fray about the ‘truth or not’ game behind the Daewoo Group’s divesture program initiated by the Kim Dae-jung government.