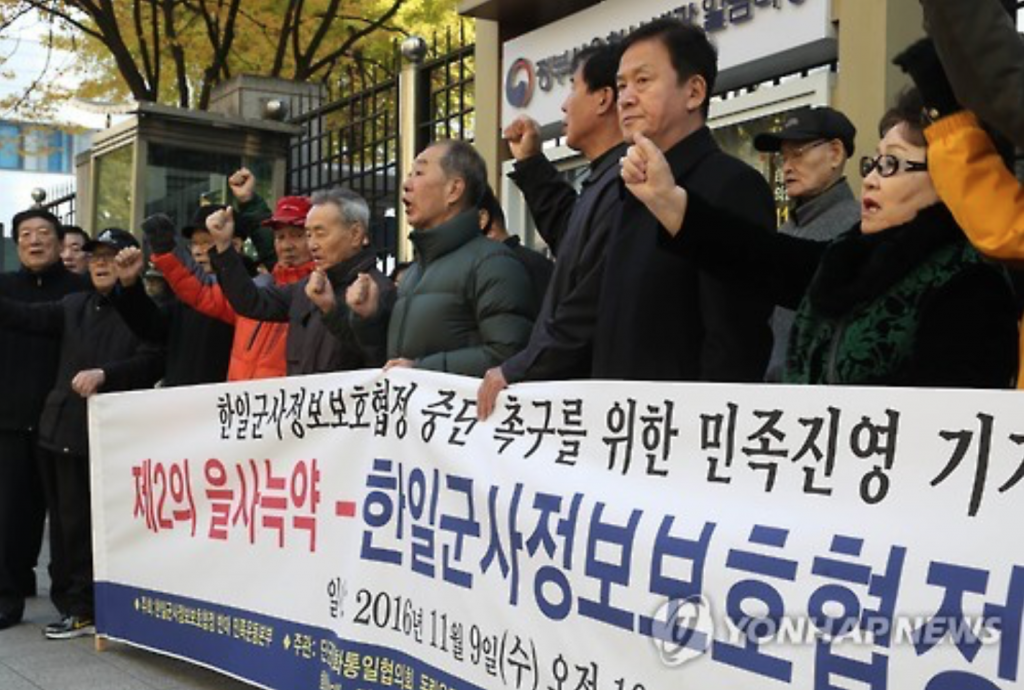 In this photo taken on Nov. 9, 2016, members from a civic group hold a press conference to show their objections to the intelligence-sharing pact with Japan in front of a government building in Seoul. (image: Yonhap)

“The military information-sharing pact with Japan will help Seoul to better counter the North’s provocative acts, as Japan is located adjacent to North Korea and equipped with an array of advanced information-gathering technologies,” Defense Minister Han Min-koo told reporters.

In particular, Japan is well prepared not only with means to collect data on any provocative moves by the North but also to check its advanced nuclear and satellite technologies, Han said.

The minister didn’t elaborate on what military information Seoul has agreed to provide Tokyo.

Moreover, Han flatly denied the possibility that the deal with Japan could lead to Seoul’s integration into the U.S.-led missile defense (MD) system.

The MD system is a sensitive issue because it can alienate neighboring countries, such as China and Russia, with which South Korea wants to maintain good relations. China, in particular, is Seoul’s largest trading partner and a key player in Seoul’s drive to get North Korea to give up its nuclear ambitions.

“We are in the process of being equipped with the ‘three-pronged’ system. With this, we will beef up our defenses against North Korea’s ever-growing provocations,” the policymaker said.

The Kill Chain and the KAMD are designed to detect and destroy incoming missiles in the shortest possible time. The KMPR is aimed at launching attacks on North Korean leader Kim Jong-un and the communist regime’s military leadership if signs of the imminent use of nuclear weapons are detected.

It remains to be seen whether the government’s push for the GSOMIA deal could generate win-win military synergies for Seoul and Tokyo amid strong objections by opposition parties and civic groups.

The scheduled bilateral pact comes as those against the deal claim the agreement is being arranged too hastily and in secret. They argue that it is inappropriate to ink the deal, given Japan has not sincerely apologized for its wartime atrocities while moving to expand its military role overseas.

The opposition parties said they will impeach the defense minister if the ministry signs the deal without seeking more public understanding.

The two countries, meanwhile, concurred on a draft agreement reached in the last two rounds of working-level talks held respectively in Tokyo on Nov. 1 and Seoul on Nov. 9. Seoul’s defense ministry has asked the Ministry of Government Legislation (MOLEG) to review the agreed terms through the foreign ministry.

After the initial review by MOLEG, the agreement will be examined by related vice ministers and then sent to the Cabinet for approval this month. If approved by the Cabinet and the president, the pact will then be finally signed between the two nations.

In December 2014, South Korea, the U.S. and Japan signed a preliminary deal that calls for the voluntary sharing of military secrets on North Korea’s nuclear and missile programs. The deal allows Seoul and Tokyo to share such intelligence via the U.S. after their bilateral pact fell through in 2012.

Pyongyang’s repeated provocations have provided strong momentum for Seoul and Tokyo to resume discussions about the GSOMIA. The communist country conducted two underground nuclear tests this year alone, following detonations of nuclear devices in 2006, 2009 and 2013.

Currently, Seoul maintains pacts with 32 countries for sharing military information. It has recently asked China to start negotiations on such a pact, but China has not responded yet.