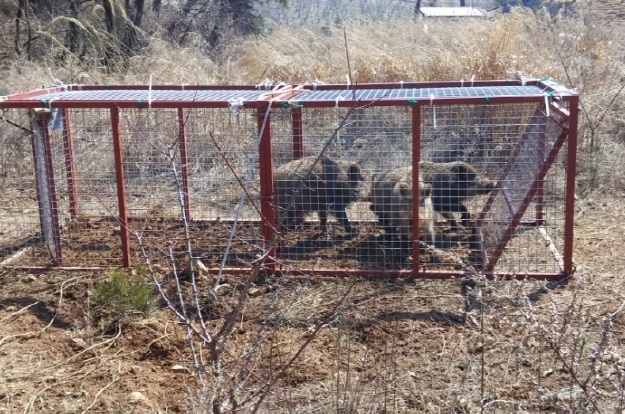 SEJONG, Jun. 12 (Korea Bizwire) — The South Korean Rural Development Administration (RDA) has announced the development of a trap that will allow for the easy capture of wild boars.

The wild animals have been blamed for causing harm to farmland nationwide. The RDA stated that wild boars have been appearing at the nation’s farms mostly in mountainous areas, bringing harm to agricultural crops.

“If there are many wild boars during the busy farming season, it can be psychologically damaging for farmers,” said one official at the RDA.

The newly developed trap is designed to capture wild boars in three steps. First, food should be provided to the boars so that they visit the area regularly.

After five consecutive days of providing food, the trap can be installed. With the trap left open, the ground within the trap is dug and three times the normal amount of food is placed within.

After the wild boar eats the remaining food for three days or more, the trap can be lowered shut.

The RDA said that the trap has been more effective on rainy days.

“Even if the trap had already captured a few boars, it can help catch more if bait is continuously provided within the trap,” said the official.