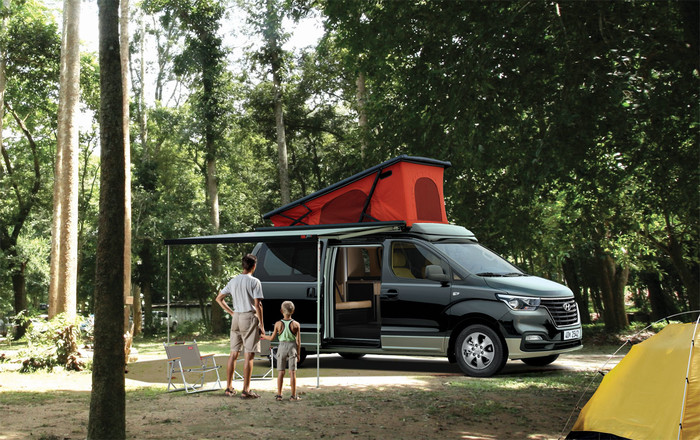 In the future, RVs will be able to be converted from all types of vehicles. (image: Hyundai Motor)

SEOUL, Feb. 28 (Korea Bizwire) — Various vehicle models such as passenger cars, cargo trucks and special vehicles will now be able to be converted into recreational vehicles (RVs) or campers in South Korea.

The Ministry of Land, Infrastructure and Transport said the lower statute of the Automobile Management Act, which includes deregulation measures to revitalize the market for RVs, has been revised and went into effect on Friday.

Previously, it was difficult to convert passenger and cargo cars, as motorhomes were classified as vans, but in the future, RVs will be able to be converted from all types of vehicles.

In addition, RVs were required to have a uniform set of sleeping facilities, cooking facilities, and washing facilities, but the relevant standards will be eased to allow the development of various types of motorhomes according to the needs of the customers.

For sleeping facilities, only one-third of the seating capacity is required, and a convertible sofa is acceptable.

Taking into account the demand for family units, additional boarding members during motorhome conversion is also allowed within the scope of securing safety.

Safety standards for camping equipment in RVs have also been implemented.

Along with safety standards, there was a ban on changing the model of a car due to safety concerns, but the government also decided to allow conversions of cargo trucks and special vehicles in the future.

Special vehicles such as fire trucks with a fixed age of use can be fully reused by converting them into trucks.

These vehicles, which are usually expensive, can be produced at relatively low prices if converted from cargo trucks, reflecting the high demand in the market.

In addition, a system for certification of aftermarket components has been implemented, and for cars registered for decommissioning, the system is improved so that they can be replaced with a certificate of cancellation registration when applying for tuning inspection.

The government also strengthened consumers’ right to know by allowing them to mark the time of production by the end of the production year.