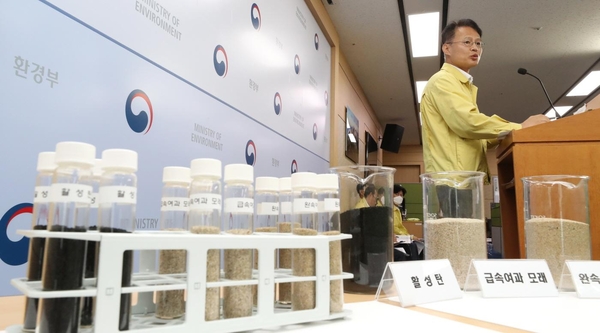 An environment ministry official announces results of on-site inspections of water purification plants nationwide in a news conference at the ministry in Sejong on July 28, 2020. (Yonhap)

SEOUL, July 28 (Korea Bizwire) — South Korea’s government has not found any worm-like organisms in tap water distribution and consumption points nationwide after conducting field inspections of all water purification plants for the past 10 days, the Ministry of Environment said Tuesday.

The ministry said it carried out on-site inspections of all 435 water purification plants across the country from July 17-26 and no midge larva-like creatures were found in their distribution reservoirs and the tapping points of consumers.

But those organisms were not detected in the three plants’ distribution reservoirs, nor in the tap water of their consumer households, it noted, explaining filter papers may have blocked the foreign objects from flowing into the tap water pipes.

The ministry said the presence of bugs in the Hapcheon and Muju plants’ filter papers were caused by their lengthy cleaning cycle and the filter paper at the Gangneung plant may have been exposed to the outside. The ministry vowed to resolve all those problems by Friday.

The ministry’s on-site inspections came after residents in Incheon, west of Seoul, reported hundreds of complaints of larva-like organisms in tap water since July 9, which were followed by similar complaints in Seoul, Busan, Gyeonggi Province and other regions nationwide.

In an earlier inspection of 49 advanced water treatment plants in Incheon and other parts of the nation, the ministry announced that bugs were found on the surface of activated carbon filters at seven of them.

In Incheon, for instance, bugs have disappeared from water pipes since July 22, as authorities have distributed tap water after shutting off all the contaminated carbon filters. 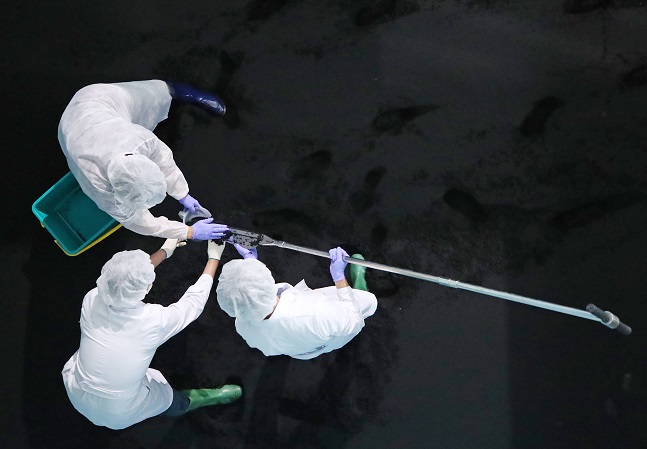 Officials collect samples of activated carbon at a water purifying plant in Seoul on July 21, 2020. (Yonhap)

Some of the midge larvae that remained in the water pipes have been found at homes but the number of complaints has sharply declined, the ministry said.

The ministry said it will come up with a package of comprehensive countermeasures, including installation of additional anti-insect screens at water purification plants, to enhance the safety of drinking water by the end of August.

The government of Seoul also said Tuesday that it has not found any worm-like organisms in its tap water or at its water purifying facilities after conducting on-site inspections and analyses of samples.

The municipal authorities received a total of 73 complaints about suspected midge larva-like creatures in tap water from July 14-26 and carried out a joint field inspection with the environment ministry July 16-17 and another joint inspection with the private sector last Wednesday.

The Seoul Waterworks Authority said in a news conference that it has not found any problem in the city’s water purification plants or in tap water samples, concluding that all the reported worm-like organisms may have been caused by external factors.

The authority said the Seoul Water Institute conducted an in-depth analysis of tap water suspected of containing bugs, while the National Institute of Biological Resources analyzed a possible connection between suspected worm-like creatures and the municipal tap water.