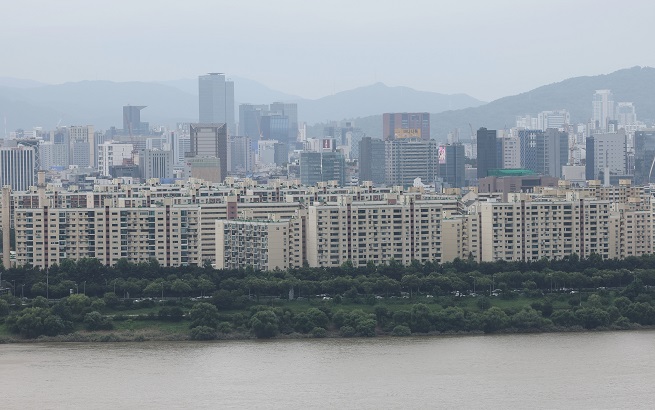 The home supply plan is the first of its kind since President Yoon Suk-yeol took office on May 10.

The government will provide 1.58 million homes in Seoul and metropolitan areas and 1.12 million houses in other provinces from 2023-2027 to stabilize the real estate market, the Ministry of Land, Infrastructure and Transport said in a statement.

“In the past, home supply plans were centered on the number of homes. But we will focus on the quality of homes, residential conditions, safety, and welfare policies for the underprivileged, in particular,” Land Minister Won Hee-ryong said in a press briefing.

Sites for the fourth residential towns have yet to be selected by the government.

The ministry said it will gradually announce designated sites for the new homes starting October and release a set of measures to facilitate reconstruction of decades-old apartment complexes next month.

“The government will come up with specific measures to lower the collected amount next month,” the minister said. 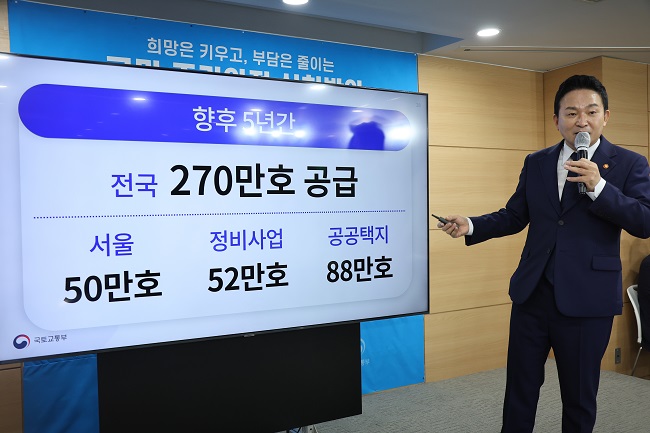 In this photo taken on Aug. 16, 2022 and provided by the Ministry of Land, Infrastructure and Transport, Minister Won Hee-ryong delivers a briefing, on the government’s plan to supply 2.7 million homes in the next five years, at the Government Complex building in Seoul. (Yonhap)

The government will also allow property development companies in the private sector to lead high-rise downtown residential building projects with some incentives, the statement said without elaborating.

Moreover, it is planning to ease the structural safety standards for existing apartments to be deemed eligible for reconstruction as demand grows for better residential conditions.

Many decades-old apartment complexes in Seoul and other major cities have not been approved for reconstruction as they still meet basic safety standards.

Mentioning the first residential towns of Ilsan and Bundang in Gyeonggi Province built three decades ago, the minister said the government will present a “master plan” by 2024 in order to revamp the towns.

As for semi-basement apartments, better known as “banjiha” in South Korea, the government plans to help residents in such underground flats move to public homes and support renovation of banjiha homes if residents want to stay due to financial issues.

The move comes after three family members drowned at a banjiha house as flood waters filled their home during torrential downpours last week.

Home prices soared over the past several years despite packages of measures, such as tax hikes and tighter lending rules, intended to rein in prices.

Critics say the previous administration only pursued demand constraints, and punitive taxes and other market-unfriendly measures that disturbed the market.