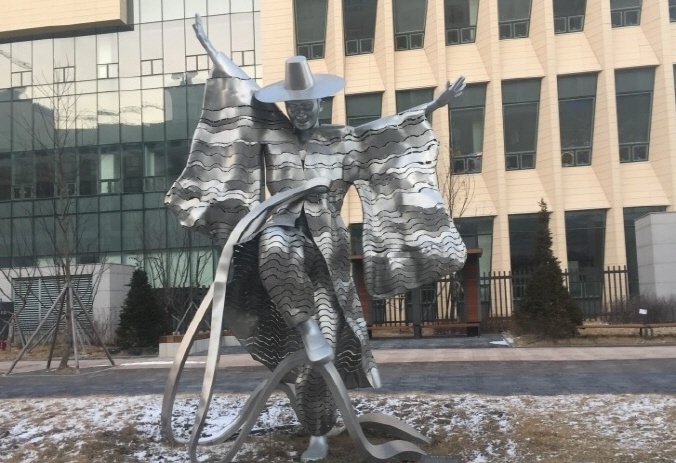 In the instruction of the work, the sculpture is explained as “a piece of work to depict the beauty of Korean dance. (image: Social Media)

SEJONG, Dec. 17 (Korea Bizwire) — A sculpture in front of a government building referred to as the ‘Grim Reaper’ among civil servants is once again looking for a new home.

The sculpture, which was located on the boulevard of Sejong Government Complex 2 in the administrative city of Sejong, was removed last Saturday.

The metal sculpture, named “Enjoying Our Song and Rhythm,” was initially erected in front of the nearby National Tax Service headquarters in 2015.

The sculpture is of a man dressed in a hanbok and wearing a gat, a Korean traditional hat made of bamboo and horsehair, and looks like he is flying up with both arms for a dance.

In the instruction of the work, the sculpture is explained as “a piece of work to depict the beauty of Korean dance.

Korean dance is known for its delicate and sophisticated movement, and the sculpture was designed to let the world see how beautiful our dance is.”

Contrary to the author’s intentions, however, the reactions of citizens and government officials were mainly negative, with comments like “It is scary like an angel of death”, due to its bizarre smiling face.

Especially at night and when the weather is bad, the lights and cold metal material combine to make the sculpture look even more horrifying, and there were constant complaints that citizens were “terrified to see the sculpture when passing by.”

A few months later, the sculpture was moved to an empty government building nearby.

However, controversy flared up again when the National Fire Agency (NFA) moved to the building the following year and the Ministry of Interior and Safety earlier this year.

In particular, there have been complaints from inside the NFA that officers get “scared every time they see the sculpture” amid a series of large-scale fires and accidents since last year.

The office eventually decided in August to relocate the “Grim Reaper.”

However, it was not easy to find a new home for the statue. There was no place to go because it was obvious that residents would protest at the Sejong Government Complex or any place in Sejong City.

Government officials, who have so far failed to find an answer, decided to keep the “Grim Reaper” statue temporarily hidden inside another government building for the time being.