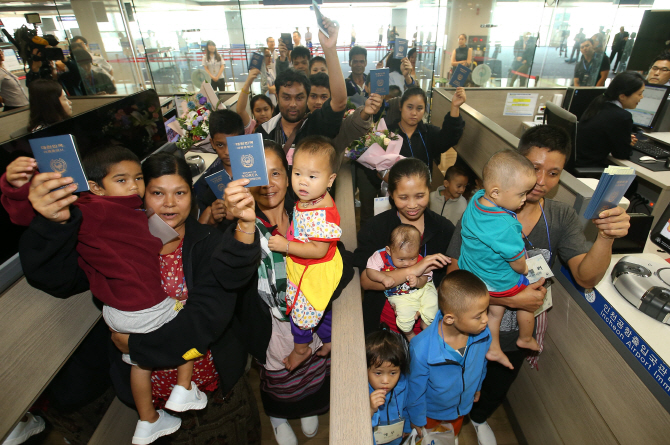 South Korea drew up the rules based on the Refugee Act in July 2013 and launched the pilot project for the first time after a review by an immigration policy committee in 2015. (Yonhap)

SEOUL, Apr. 16 (Korea Bizwire) — It has been assessed that South Korea’s resettlement refugee program, which has been operating as a pilot project since 2015, has achieved successful outcomes compared to overseas cases.

According to a case study report released at the end of last year by the Ministry of Justice, Myanmar refugees who resettled in South Korea received favorable reviews from 10 resettlement indicators, including employment, financial status, children’s education and health.

The refugee resettlement program is a system in which refugees who wish to permanently move from refugee camps abroad to a third country, not their home country, are selected to be accepted by the third country.

The refugees who wish to relocate must receive recommendation from the United Nations High Commissioner for Refugees (UNHCR), which grants refugee status after screening.

South Korea drew up the rules based on the Refugee Act in July 2013 and launched the pilot project for the first time after a review by an immigration policy committee in 2015.

During the pilot project, 86 refugees from 16 households consisting of ethnic minorities in Myanmar were accepted. In 2015, 22 refugees were accepted, increasing to 34 in 2016 before dipping to 30 in 2017.

The research team surveyed 36 adults, five teenagers and 15 children through collective discussions and group interviews to find out their satisfaction level with life in South Korea.

It also compared the results with the results of a resettled refugee survey in Denver, Colorado, U.S. and Langley, British Columbia, Canada.

As a result, resettlement refugees in South Korea outperformed U.S. and Canadian cases in the areas of employment, education and language, the most important indicators of resettlement.

The employment rate of resettled refugees in South Korea was 60.5 percent, 84.2 percent for men and 36.8 percent for women.

The number is similar to that of Denver case in the U.S. and much higher than the Langley case in Canada.

While half of the refugees resettled in Langley, Canada, were using social security benefits as income, all of the refugees in South Korea were self-reliant on their income after leaving the immigration center.

However, the research team stressed that it was too early to carry out regularization of the project just because of the success of the pilot project, and that the project should be carried out with the public’s support and consent in consideration of the controversy surrounding the acceptance of refugees from Yemen on Jeju Island.