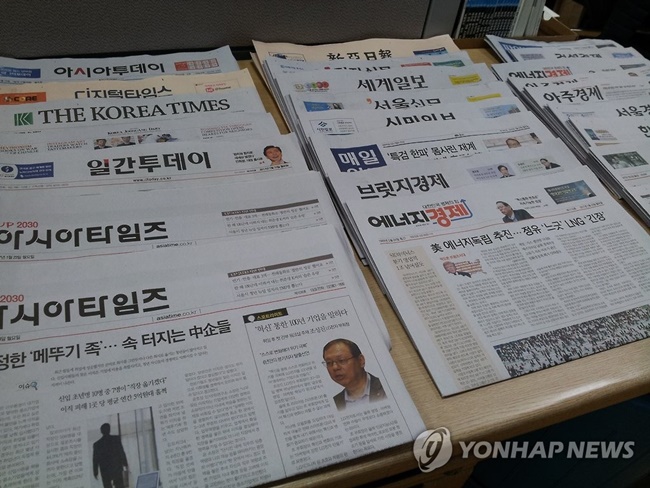 According to a report on media consumption patterns among heavy internet users conducted by the Korea Information Society Development Institute (KISDI), over 35 percent said they regularly read news articles either in print newspapers or on the web. (Image: Yonhap)

SEOUL, Jul. 21 (Korea Bizwire) — A new report has revealed that Koreans who are heavy internet users are also more likely to read print newspapers and books.

According to a report on media consumption patterns among heavy internet users conducted by the Korea Information Society Development Institute (KISDI), over 35 percent said they regularly read news articles either in print newspapers or on the web.

Among the respondents who claimed to be avid internet users, those who like to read online news accounted for 57.1 percent, nearly double the figure of 28.7 percent for those who didn’t consider themselves as heavy internet users.

The same pattern was observed when respondents were asked about how often they read print newspapers.

Over 14 percent of heavy internet users were found to enjoy reading print newspapers, while the figure stood at just over 7 percent for passive internet users.

The trend continued outside the realm of newspapers, as the report also found heavy internet users are more likely to read magazines and books, spending a daily average of just over 56 minutes on these pursuits, compared to 38.9 minutes among passive internet users.

The report said, “The finding that heavy internet users are spending more time reading physical newspapers and books contradicts the popular belief that the internet is replacing print media.

“Heavy internet users also turned out to spend more time enjoying offline cultural activities such as going to the movies and watching shows.”

However, the time spent on desktop PCs reading articles among both groups was significantly lower than for mobile devices, signaling a shift away from desktop internet to the large smartphones that have been dominating the mobile market.

The findings from the report come after the KISDI research team analyzed data gathered from the 2016 Korean media panel survey conducted with a sample of 9,877 individuals.