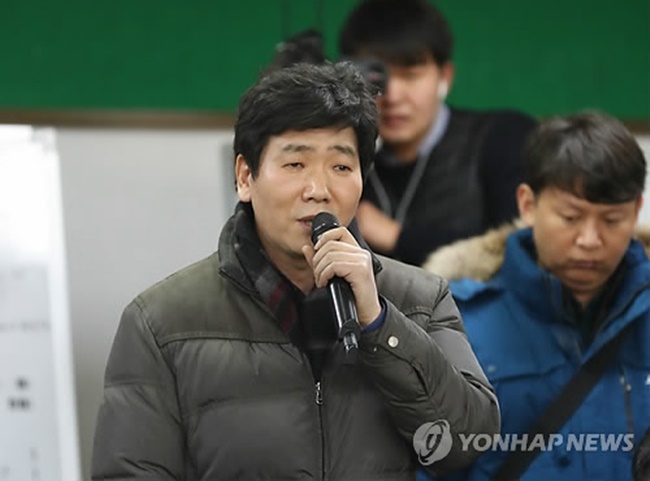 Seok Gyeong-sik, the president of Sejong Hospital, speaks during a press briefing in the city 280 kilometers southeast of Seoul on Jan. 26, 2018. (Image: Yonhap)

MIRYANG/SEOUL, Jan. 26 (Korea Bizwire) – Officials of a fire-ravaged hospital in the southern city of Miryang apologized Friday for the deadly blaze but claimed they have complied with disaster prevention regulations amid criticism that no sprinkler system was installed in the hospital.

The blaze left at least 37 people dead and more than 140 others injured. Witnesses said it started near the hospital’s emergency room on the first floor, but did not spread to other floors. Most victims are thought to have died after inhaling toxic gas.

“We express our great sorrow to the patients and families. … We will do our best to take care of the aftermath,” Seok Gyeong-sik, the president of Sejong Hospital in the city 280 kilometers southeast of Seoul, told a press briefing.

Seok was accompanied by Chairman Song Byeong-cheol who cited a set of possible causes of the blaze.

“We don’t know yet the exact cause of the fire, but some say that it might have been caused by an electric spark from one of the two heating and cooling systems, or a spark from the ceiling, or it might have started from a facility designed to sanitize surgical equipment,” he said.

Mindful of the criticism that the death toll could have been reduced had there been sprinklers installed, Song argued that his hospital was not subject to the mandatory installation of sprinklers due to its small size.

He also claimed that his hospital has abided by fire prevention procedures, such as regular facility checkups and fire drills.

In a separate press conference, Choi Man-woo, the chief of the Miryang Fire Station also apologized.

“We feel sorry for the citizens and the bereaved families for our failure to save each and every one (of the patients caught in the fire),” he said.

“When our advance team arrived at the scene, it was covered with too much smoke and fire for us to make our way into the hospital,” he added.

“Stepping into the hallway after using the bathroom, I found it was full of smoke and screams asking for help,” said Ha Yong-gyu, a 89-year-old patient who was hospitalized for a cold on Thursday.

While walking downstairs, it felt like such a long way down, but I took a deep sigh of relief as I got out of it alive,” he added.

Meanwhile, it was found that the authorities had ordered Sejong Hospital to rectify a problem with its fire escape apparatus two weeks ago. But six months earlier, the hospital had notified the fire service that its firefighting facilities had no problem.

The tragic accident came a little over a month after a blaze gutted a sports complex in the central city of Jecheon, killing 29 people. Critics have called into question the government’s much-trumpeted campaign to improve public safety.