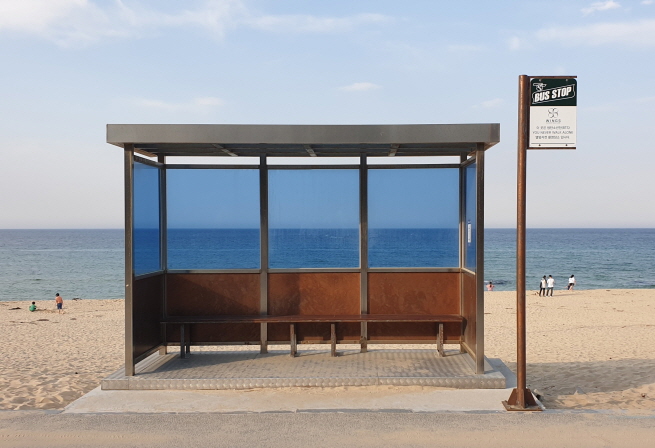 The “Hyangho Beach Bus Stop” in the Jumunjin district of Gangneung, Gangwon Province, ranked first in a popularity poll of BTS filming locations across Korea conducted by the Korea Tourism Organization (KTO) on 22,272 fans in 137 countries.

According to the KTO, 21.8 percent of the pollees chose the Hyangho Beach Bus Stop in Gangneung, about 240 kilometers east of Seoul, as their favorite travel destination in South Korea.

The site, also dubbed “Bangtan Bus Stop,” is where the album cover for BTS’ “You Never Walk Alone” and the music video of “Spring Day” were shot.

Dadaepo Beach in Busan, a southern port city, ranked second with an approval rating of 12.2 percent, followed by Metasequoia Road in Damyang in South Jeolla Province with 12.1 percent, the Line Friends flagship store in Seoul’s Itaewon neighborhood with 11.8 percent and Iryeong Station in Yangju, north of Seoul, with 7 percent, the poll said.

By age, fans in their 30s and younger preferred Gangneung’s Jumunjin, while people in their 40s and 50s favored Itaewon and Damyang, respectively, it noted, adding that women accounted for 94.8 percent of the respondents.

“The SNS promotion of the popular BTS filming locations will be further strengthened, and a variety of relevant tourism programs will be developed,” a KTO official said.