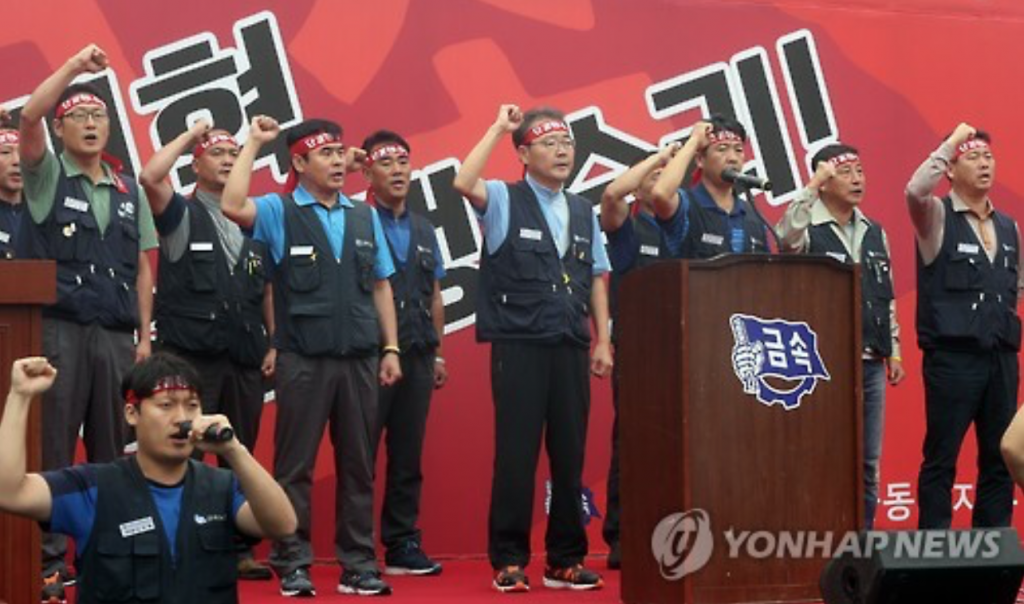 SEOUL, Oct. 5 (Korea Bizwire) – Unionized workers at the Hyundai Motor Group threatened Wednesday to stage a general strike if the government invokes its right to emergency arbitration to order workers at South Korea’s No. 1 carmaker to return to work, sources said.

The move came after Labor Minister Lee Ki-kweon said last week the government would consider calling for the emergency measure if the trade union and management fail to iron out a compromise and end a strike at Hyundai Motor Co. that is seriously hurting car parts subcontractors and the overall economy.

By law, the government can intervene to suspend a walkout when it is related to public services, adversely affects the daily lives of the general public and jeopardizes the national economy. If enacted, the concerned parties are required to immediately suspend walkouts for the following 30 days.

Should a general strike begin, some 98,000 workers, including those from the group’s affiliates — Kia Motors Corp., Hyundai Rotem Co., Hyundai KEFICO Corp. and Hyundai Steel Co. — are expected to join.

“We cannot condone the government dismissing our legitimate strike as being illegal,” a unionist told Yonhap News Agency on the condition of anonymity. “(We) will neutralize the emergency arbitration move through a general strike by our 100,000 unionists.”

Opposition lawmakers chimed in to support the unionized workers, although the government warned against any major strike, which it said would hamper its efforts to shore up growth amid growing uncertainties in the global economy.

“The current labor-management relations are careening towards the worst point since the foreign exchange crisis (of the late 1990s),” said Rep. Lee Yong-deuk of the main opposition Minjoo Party of Korea who is a member of the National Assembly’s committee on environment and labor.

“Opposition lawmakers will not turn a blind eye to the government’s hard-line response that only foments conflict rather than fostering dialogue or compromise,” he added.

Lim Seo-jeong, a senior labor ministry official, said that the act of workers in Hyundai Motor Group joining a general strike on an issue not directly related to their individual workplaces goes beyond the legal limits.

“Hyundai Motor’s unionists should settle their issues through a labor-management compromise rather than a strong struggle,” Lim added.

With Hyundai Motor Group unionists and cargo transport workers moving to join the recent wave of workouts, the affected businesses are expected to suffer the highest production losses in a decade.

According to data compiled by the Ministry of Employment and Labor, the combined number of lost working days in the industries affected by the strikes reached 1.059 million in the January-September period compared with 447,000 days tallied last year. This year’s figure is much higher than the 10-year average of 620,000 days.

Industry watchers said that the lost working days are attributable to relentless strikes that local trade unions have carried out over the ongoing restructuring of major industries, the government’s push for a performance-based salary system and other issues.

The production losses are expected to further rise as the Korea Cargo Transport Workers Federation plans to stage a general strike from Monday next week in a move to pressure the government to ease rules on the registration of small freight vehicles.

Observers forecast that it would be difficult to find any momentum for a turnaround in ongoing labor disputes as both the government and trade unions show no signs of budging from their positions.

The government has argued that strikes by regular workers — particularly those from the public and financial sectors that have enjoyed relatively high salaries, are “inappropriate” as they could cause hefty losses to subcontractors and hurt economic growth.

The labor side, however, maintains that the government has been “excessively” pushing for labor reform.