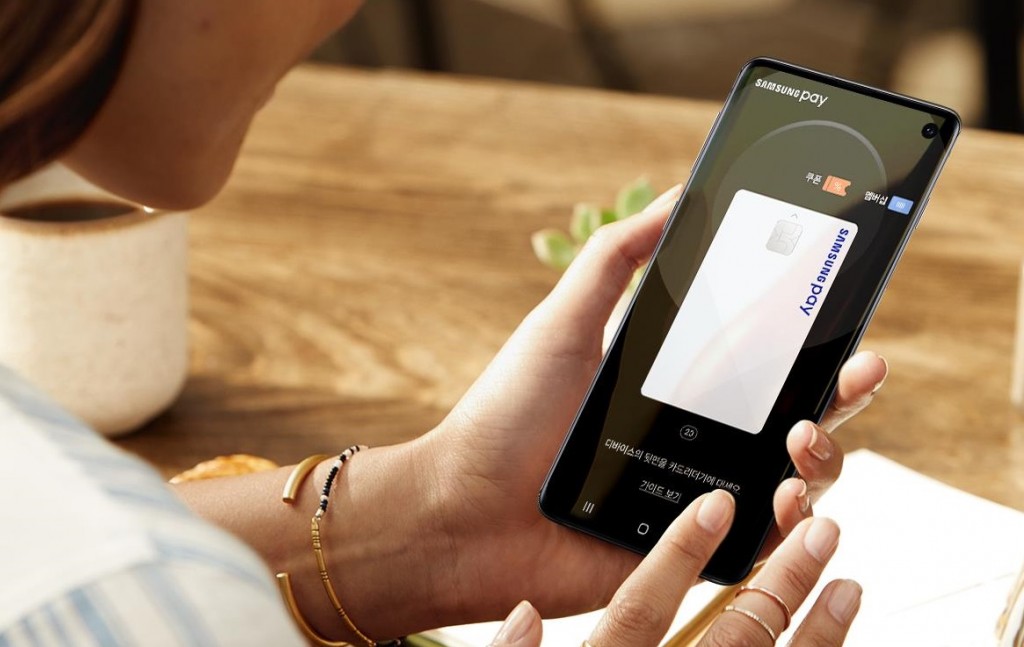 A customer holding up a mobile app credit card that can be used to make payments virtually at any store with credit card readers. (image: Samsung Electronics Co.)

SEOUL, Jul. 2 (Korea Bizwire) — Throughout history, a new invention or technological advance has often allowed people to carry less with them.

For instance, the invention of coins helped reduce the burden of people carrying loads of goods they wished to trade.

Just decades ago, it would have been considered unwise, or even unthinkable, for a person to carry a camera, a television set, a computer with Internet access and a navigation system at all the same time, all devices and functions that now come in one small device that often weighs less than a few hundred grams — a smartphone.

The small device is delivering seismic changes to all aspects of daily life, and it surely feeds through in almost all financial transactions and payment processes in South Korea, one of the most wired countries in the world, where people have the potential to live without any physical form of currency to build a “cashless” society.

Indeed, beyond credit cards, the smartphone is accelerating the trend of living without any physical money in Asia’s fourth-largest economy, and a quick peep at the daily lives of young South Koreans may offer a glimpse at just what it might be like to live in such an environment.

Park Kyung-jun, an office worker, starts his day with a bus ride to his workplace in Bundang, just south of Seoul, which he pays for with his mobile app credit card.

“I do not normally carry any cash and I cannot remember the last time I withdrew any cash from a bank teller,” says the 35-year-old Park.

He uses the same cardless mobile app card throughout the day to pay for most of his spending, including his lunch, coffee and occasionally dinner.

Even at home, he uses either his mobile card or other cashless payment methods to shop, dine and play.

“I stopped carrying cash and my credit card some time ago because most shops accept mobile cards, and at those that do not, I can simply wire the money on my phone,” Park says.

Recent surveys show most people still have some cash on them just in case, but the amount they carry has greatly dropped over the years.

The proportion of non-cash payment methods such as credit cards or debit cards, on the other hand, shot up to 52 percent last year, up from 37.4 percent three years earlier. 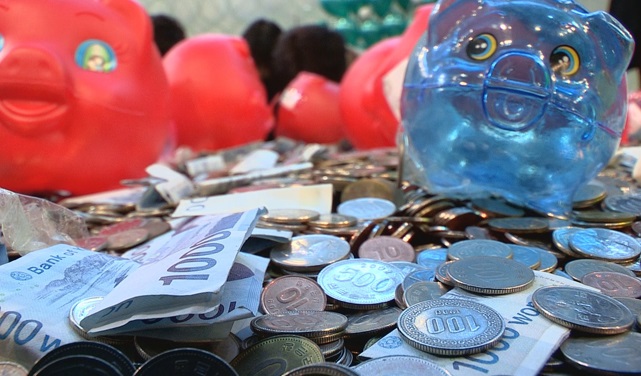 A pile of coins from piggy banks collected as part of a recent campaign by the Bank of Korea to use and recycle coins stashed away in people’s homes. (Yonhap)

One of the reasons more and more people try to avoid using cash is because it often means ending up with a pocketful of small but heavy coins.

“The difference between paying in cash and with a credit card is that when I pay with a credit card, I do not have to walk around with a pocketful of change all day and then put them in a big pile of coins at home that has been sitting there for years,” said Kim Mi-ra, a 42-year-old housewife.

The same reason is why many here believe a redenomination of the local currency may be inevitable, partly to help reduce the need for small change, and also why many believe a “coinless” society may soon become a reality before a cashless society.

“A cashless society may be a long way from now, but a coinless society could easily be realized, given the country’s advanced technology and high distribution rate of credit cards and Internet banking services among its population,” a BOK official said, asking not to be identified.

In fact, the central bank began its own studies years ago on ways to physically get rid of coins from the local market.

One of the ways being considered is to have change of less than 1,000 won, the smallest banknote here, electronically transferred to people’s bank accounts, according to the BOK official.

Doing away with coins, or with cash altogether, also makes sense economically.

Amid a steady decline in the use of cash, the amount spent on minting new banknotes and coins came to 110 billion won last year, down 17 percent from the previous year and 28 percent from a year before that, according to the BOK.

At the front of the country’s cashless drive is Starbucks Coffee Korea Co. which recently expanded the number of its cashless stores to 759, nearly 60 percent of its 1,280 local stores.

The move is part of its broader digital innovation drive, and the number of cash payments has been declining at its stores in South Korea.

Still, there are doubts about the feasibility of completely doing away with cash, and security concerns remain over the current payment network.

Despite the rapid growth of non-cash transactions, cash remains a reliable payment method even in South Korea, especially among older people.

According to a satisfaction survey conducted by the BOK in 2017, cash was the most trusted means of payment, with a score of 82.1 points. Credit cards earned 78 points and debit cards scored 74.5.

People in their 60s and 70s made an average of 15 cash purchases per month in 2017 but paid with a credit card less than 10 times.

“But seniors are still familiar with cash payments, and a gradual shift into the cashless society should be considered,” the private think tank said, adding that a legal framework should be also established to protect people’s privacy.