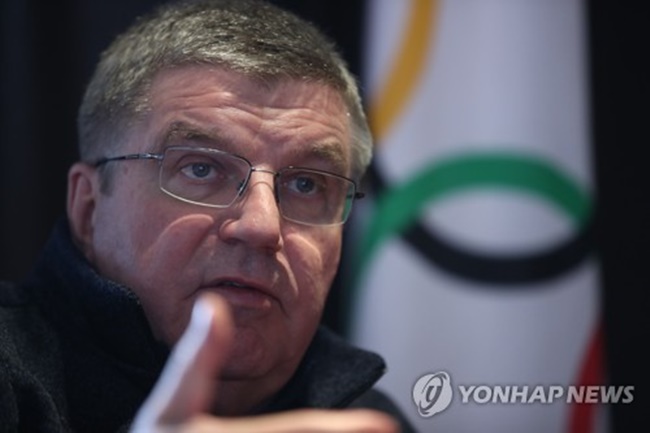 In an interview with Yonhap News Agency, Bach said he was “very confident” that the 2018 PyeongChang Winter Olympics will be clean, in particular because of comprehensive testing.

“We have had the tightest pre-game testing we’ve ever had in Olympic history. By now, already more than 14,000 tests (have been conducted) since April last year,” Bach said. “The athletes have been tested over a long period of time in a target-oriented way.

These athletes were tested according to high-risk sports and disciplines, and they were tested with regard to higher-risk countries where we had some bad experiences in the past.”

The IOC has banned the Russian Olympic Committee (ROC) over rampant doping and is only allowing clean athletes to compete as neutrals, each formally called an “Olympic Athlete from Russia (OAR).” Last weekend, the IOC cleared 169 athletes for the Feb. 9-25 competition.

“It’s a very tight net,” Bach said of pre-PyeongChang testing. “We hope we have got out of the competition as many dopers as possible, even before the Olympic Games.”

But Bach also noted that expectations have to be “realistic.” Re-tests of samples from previous Olympic Games have yielded positive results, causing several athletes to be stripped of their medals. And Bach said doping will happen as long as there are Olympic Games.

“There will never be the moment where we will be able to say now we have won the fight against doping,” he said. “This will always go on because unfortunately, it seems that it’s some kind of human nature that whenever you have people in competition with each other, some are ready to take illegal advantage.

Bach said the focus should be less on winning the battle against dopingbut more on making progress.

“We can’t put the bar so high to say we have to win,” he added. “The moment where we can say, ‘We’ve won it,’ unfortunately, will not come.”